In this alleged season of joy, Christians around the world celebrate the birth of their savior. In his honor they profess to engage in selfless acts of compassion and generosity. It’s a spiritual doctrine that would be even more beautiful if it was actually carried out by all of those who purport to believe in it. Sadly, some of the most vocal vicars of faith actually do more to obstruct these hallowed principles. 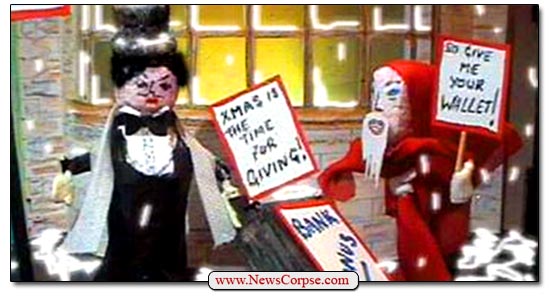 For example, there are radical Christianist Republicans who sow hatred and mistrust of anyone who they deem unfit to enjoy America’s gift of freedom. This year the unfortunates included Syrian refugees, Mexican immigrants, and a broad array of liberals and Democrats. And the apostates at Fox News continued to wage their annual “War on Christmas.” It’s their call to arms against the recognition of an inclusive holiday season.

America also elected Donald Trump, a greedy, lustful, gluttonous, wrath-filled, narcissist who insists that he has never had to seek God’s forgiveness because he’s never done anything to necessitate it. As long as you don’t count his three marriages, serial infidelity, fraudulent businesses, and incessant self-aggrandizement. And his devotion to the holidays is evident in the promise he makes to the disciples at his rallies. He says that “If I become president, we’re all going to be saying ‘Merry Christmas’ again.” It’s that 1930’s style totalitarianism that makes him think he can decide what we are ALL going to say.

So in the spirit of the season, we present a musical gift for the forsaken and forlorn. This is for all of those who are not huddled around a dead tree today, buried in colorfully wrapped packages. It’s for the cynics who won’t accept the notion that the birth of an alleged savior is an excuse to exchange material goods or fruitcakes that nobody likes. It is for outcasts and rebels and nonbelievers who are puzzled by the greed and commercialism that permeates the season. And yes, it’s for those who still believe that peace and goodwill are morally superior to profit and oppression. Here is Miles Davis and Bob Dorough performing the heartwarming traditional Christmas ballad Blue Xmas:

One thought on “Blue Xmas: A Christmas Carol For Cynics, Skeptics, And Other Swingin’ Realists”