During the presidential campaign there was considerable anxiety about the way that Donald Trump was shaping his political ideology. It seemed to be frighteningly similar to the authoritarian regimes he admires. His casual advocacy of policies that reek of dictatorship worried civil libertarians and Constitutional experts. But now those concerns appear to have been fully justified. 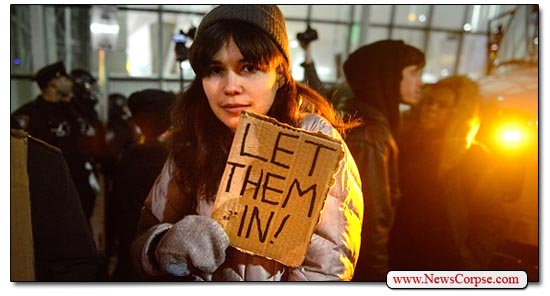 CNN’s Jake Tapper reported Sunday that the Trump administration is considering the sort of “extreme vetting” that he threatened in the campaign (video below). Tapper’s sources revealed:

“…the preliminary idea being kicked around in the U.S. government right now. And that would be to ask foreign visitors to the U.S. to provide the names of websites and social media sites that they visit, and to provide all the contacts on their cells phones. And if a foreign visitor refuses to turn that over they would be denied entry.”

This sort of invasive screening is both ineffective and contrary to the values of a free society. Probing personal information in order to discriminate against people for their political beliefs might be done in totalitarian regimes like Russia, but not in America. What’s more, once this policy is in place, all an aspiring terrorist would have to do is get a new phone before boarding the plane. And when asked about websites and Facebook pages, provide only those without any controversial content. How hard is that?

In the meantime, every innocent traveler would be subject to this invasion of privacy and potential harassment. There is no mention of what would be done with the private data after scrutiny at customs. And a regime that would demand to see it would also be likely to store it and use it against perceived political foes. That could include diplomats, journalists, and even members of Congress.

Tapper was careful to append a disclaimer of sorts to his story. He added “Again, this is a preliminary idea being discussed by the White House and the Trump administration.” However, there are already reports of these tactics being implemented. Caroline Mortimer of the UK’s Independent reports that:

“US border agents are checking people’s Facebook pages for their political views before allowing them into the country, an immigration lawyer has claimed. […] The [American Immigration Lawyers Association] said border agents were checking the social media accounts of those detained and were interrogating them about their political beliefs before allowing them into the US.”

To reiterate, these abusive tactics are being carried out against legal residents of the U.S, with valid visas. Some have lived in the U.S. with their families for many years. So if people like this can be treated so shamefully, just imagine how refugees will be treated. People fleeing terrorism, who have already endured unthinkable suffering, will be harassed and humiliated. And following that they could still be sent back to their native country and an uncertain future. Many would be marked for death as a result of their attempt to escape.

This is not the promise of freedom that is carved on the base of the Statue of Liberty. It is a decree of oppression from the new regime in Washington that is taking its cues from Vladimir Putin. And if it is allowed to stand, the American people may soon notice their own freedoms withering away. If Trump and his politburo get away with this, what’s to stop them from doing worse in the future?