Another tragic instance of hateful violence was reported Sunday. This time a man entered a mosque in Quebec and shot fourteen people as they were praying, killing six of them. This massacre of innocents occurred shortly after Donald Trump signed an executive order banning Muslims immigrants and refugees from entering the United States. The measure was widely condemned as counter-productive to the fight against terrorism. And in some respect it encourages the impression of Muslims as dangerous and undesirable. 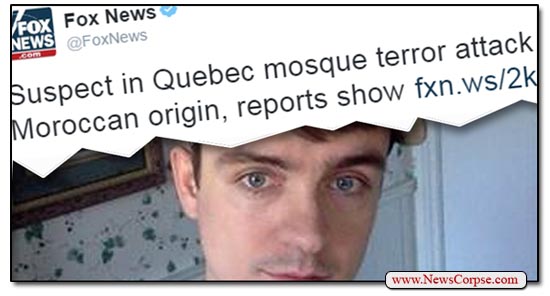 As the facts surrounding the shooting were still unfolding, Fox News rushed out a story that falsely identified one of two suspects as Moroccan. The story has since been edited to remove that assertion, but it was never corrected. A tweet is still live on the Fox News Twitter account with the same accusation:

[Update 1/31/2017: Fox finally issued a statement expressing regret for their error and they deleted the tweet]

For the record, there is only one suspect. He is a white nationalist Canadian named Alexandre Bisonnette. His social media profile includes “Likes” of France’s fascist Front National leader, Marine Le Pen, and Donald Trump. There was a Moroccan individual who was briefly detained by the police, but who was later identified as a witness. That was all that Fox needed.

This is the sort of defamatory allegation that often finds a place on Fox News. If any event occurs that provides an opportunity to smear their perceived political foes, Fox News jumps on it. Therefore, Democratic protests, or Black Lives Matter rallies, are reported as assemblies of decadent liberals. And anything involving Muslims is automatically turned into a terrorist attack by radical Islamists.

The example shown here is not merely a journalistic mistake. It is representative of Fox’s deliberate intent to demonize Muslims. And that intention is getting support in the White House. Trump’s press secretary, Sean Spicer, referenced the Quebec shooting at the morning briefing. He said that:

“It’s a terrible reminder of why we must remain vigilant and why the President is taking steps to be proactive rather than reactive when it comes to our nation’s safety and security.”

Spicer’s comment makes the false assertion that there is a “reminder” in this shooting that relates to Trump’s policy. Of course, nothing in the Muslim ban implemented by Trump would have prevented this tragedy. That, however, didn’t stop Spicer from exploiting it. His irresponsible statement implies that there was a Muslim connection to the shooting. That falsehood can only exacerbate the bigotry that already infects the Fox News audience and Trump’s Republican Party.

At a time when victims and their families are trying to cope with this horror, Fox News and the White House are only making matters worse. Their misinformation spreads far more quickly than any attempt to correct it, which they haven’t made. So rather than receiving the sympathy and concern that was warranted, the Muslim community was victimized again by dishonest media and a bigoted administration that is more focused on political advantage than on truth or human decency.