It’s hard to believe that it’s already been a month of the embarrassment that Donald Trump has inflicted on America. With all of the fumbling, lying, and childish insults, it seems like a year. Now, as he prepares to give his first address to a joint session of Congress, Trump took a moment to show his appreciation for those responsible for his ascendancy to the seat of power. 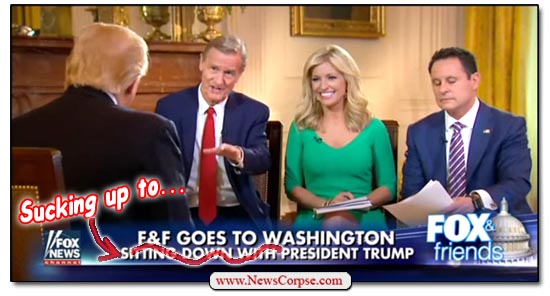 In an interview with Fox & Friends, Trump courageously faced the notorious suck ups on the curvy couch. The inquisition began with the hard-nosed Steve Doocy introducing Trump by saying:

Doocy was referring to Trump’s praise of Fox & Friends during a press conference on February 16. In response to a question about leaks and fake news, Trump wondered completely off topic. Instead of answering the question, he ranted about the “hatred and venom” coming from Don Lemon at CNN. In the process he also slobbered all over Fox & Friends saying that:

“Fox & Friends in the morning, they’re very honorable people […] they have the most honest morning show.”

Of course they do. They spend three hours a day fluffing The Donald’s ego and inventing scandals about his critics and opponents. And don’t think that the President hasn’t noticed. He expressed his gratitude to his “Friends” and let them know exactly how much they meant to him:

“You have treated me very fairly. And I’ve been a friend of your show for a long time. Remember those call-ins, right? Maybe without those call-ins, someone else is sitting here.”

Indeed. Trump had a regular weekly segment on Fox & Friends called “Mondays with Trump.” He would phone in his incoherent opinions on whatever was the outrage of day. It surely had an impact on the Fox audience and juiced them up for his eventual candidacy. Combine that with the non-stop coverage of his stump speeches (by all the cable news networks), and their relentless defense of everything from pussy grabbing to Russian election tampering, and Fox’s designation as the PR division of The Trump Organization is irrefutable.

It’s not surprising that Trump would thank Fox News for getting him elected. He’s been haranguing the media as “fake news” and even worse, as “the enemy of the American people,” for months. But he’s been careful to keep Fox out of the line of fire. In the same interview that he thanked Fox, he also said this of the media in general:

Never mind that he has no evidence of any of those accusations. Fake or nonexistent sources would be a fireable offense at any credible news organization. What’s more, he said the sources for stories about former NSA director Michael Flynn didn’t exist. But that didn’t stop him from firing Flynn based on facts revealed in those stories.

If Trump is going to assert that stories are made up, he should be required to present examples. Don’t hold your breath. His idea of fake news and honest news is warped beyond repair. That explains how he can lash out at CNN for telling the truth, but praise Fox & Friends as honest.