One of the most neglected observations about Donald Trump’s presidency is that he never wanted to be president. His stage-five narcissism and bloated ego has always found campaigning to be more to his liking. He feeds off of the mindless cheers of his glassy-eyed disciples. In his bubble-bunker he imagines (falsely) that they reflect the views of the whole country. 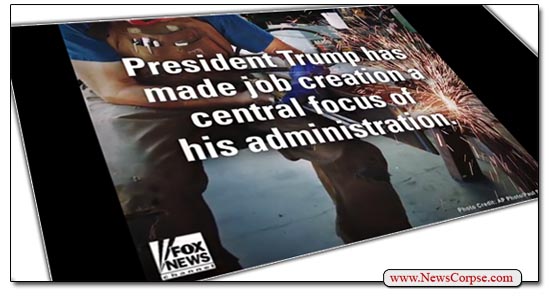 For that reason Trump commenced his reelection campaign moments after completing his poorly attended inauguration address. It was an earlier start than any other president. And it was plain that he did it to justify holding more rallies before screaming Deplorables.

Now, in support of Trump’s reelection efforts, Fox News has stepped forward to do their part. This isn’t the typical Trump-fluffing that goes on everyday on the pro-Trump network. Sean Hannity, Tucker Carlson, and the “Curvy Couch” potatoes on Fox and Friends, were always expected to slobber over everything Trump does and says. No, this is something else that goes way beyond the mere contemptibility of biased journalism.

Fox News posted a video that can only be described as a campaign ad for Donald Trump. It is filled with positive imagery and clips of the President advocating American labor and goods. It even attributes laudable policies to Trump that have no factual basis. Watch for yourself:

Some of the statements in this brazenly partisan propaganda deserve more detailed analysis. For instance:

Where is the evidence of that? He has talked about it from time to time, but has done nothing substantive about it. His bragging about bringing jobs back from other countries has turned out to be a hoax. The companies he touted still laid off Americans and shipped those jobs elsewhere. He hasn’t even managed to get an infrastructure bill off the ground. The border wall is the only project he proposed that might create a few jobs, and the country is opposed to that.

This order has no plans attached to it to produce anything at all. It doesn’t require any action on the part of employers or manufacturers. And if Trump were really interested in hiring Americans, he could start by hiring them to staff his luxury golf resorts. He might also consider having his ties, suits, etc. made in the U.S. instead of China, Mexico, and Bangladesh.

Not in Trump’s world we aren’t. He has illegally employed foreign construction workers on his buildings. He uses steel shipped in from China. And even the furnishings inside are mostly made in other countries.

Revelations about Trump lying have become so commonplace that people are beginning to tune it out. But what’s troubling about this video from Fox News isn’t just the bald-faced lies. It is that Fox News has no business producing campaign videos for any candidate for office. It is blatantly improper for an alleged “news” organization and a breach of journalistic ethics. It should be reported to the Federal Elections Commission as an in-kind contribution to Trump’s campaign. And the network should be fined and explicitly prohibited from further breaches.

However, it may be too much to expect the FEC to act on this. It is a notoriously toothless agency. So Fox may get away with their electioneering for now. But the more the public knows about this violation of trust, the more they will shun the network and its cast of Trump shills. That’s already happening as MSNBC, on the strength of Rachel Maddow’s superb investigative reporting, has surpassed Fox in the ratings. Rupert Murdoch recently took his own Fox News off the air in the U.K. citing lack of viewers. Let’s make him do the same here at home.