A few weeks ago Fox News was forced to make some drastic programming changes. They had to terminate Bill O’Reilly due to multiple allegations (and settlements) of sexual harassment. They should have seen that coming since they renewed his contract with knowledge of a massive $32 million payoff. And there was another $13 million to half a dozen other victims. Fox News also fired Eric Bolling, the host of the newly launched The Specialists, for sexual misconduct. Do you notice a pattern? 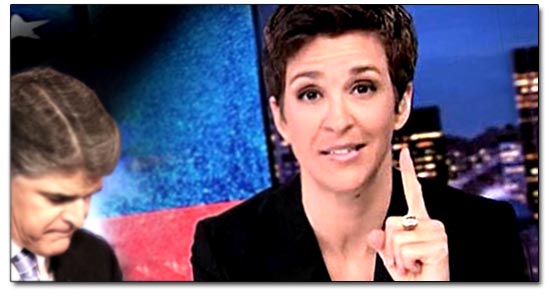 With these cancellations there were holes in the schedule that needed to be plugged. Consequently, Fox News decided to move Sean Hannity’s 10:00 pm show into O’Reilly’s slot at 9:00 pm. This put him into a head-to-head battle with MSNBC star Rachel Maddow. It also firmed up Fox’s primetime as three hours of fawning Trump-fluffing, beginning with Tucker Carlson, then Hannity, and the all new Laura Ingraham Angle. It’s been four weeks since Hannity’s move and the ratings already have a story to tell.

Hannity is, without a doubt, Donald Trump’s most cloying sycophant on Fox News. He serves as an advisor to the White House and relentlessly defends any and all Trump atrocities. As for Trump, he posts frequent promotional tweets about Hannity (seventeen just since the inauguration) and has sat for three interviews as President.

Hannity front loaded the first week in his new time slot with high profile guests chosen to spike ratings. They included Fox favorites like Steve Bannon, Bill O’Reilly, and Rush Limbaugh. The second and third weeks, however, were skewed by coverage of the tragic shooting in Las Vegas and its aftermath. But now, as the new schedule settles in, Maddow has returned to the top spot. The hopes Fox News had for toppling Maddow by moving Hannity into direct competition have not succeeded, at least so far.

One of the consequences of that failure is that other Fox News programs are getting scared and beginning to attack Maddow in an effort to blunt her success. For example, Fox and Friends did a whole segment on Maddow’s analysis of the death of four Green Berets in Niger. They never laid a glove on her. In fact, they never even bothered to substantively counter anything she said. They just made catty comments about her demeanor and complained that she has opinions. But just the fact that they talked about her is evidence they are scared. If they didn’t think that Maddow was having an impact, Fox would have ignored her. And she is definitely having an impact.

For the week of October 16, Maddow decisively beat her new competition, Sean Hannity. In the critical 24-54 demographic, she won three days out of five outright, and took the whole week’s average. On Wednesday she had the highest rated program on all of cable news. Her powerful leadin helped The Last Word with Lawrence O’Donnell to win his time period as well. Even Brian Williams’ The Eleventh Hour came out on top. As a result of these victories MSNBC won the entire week in primetime.

Television ratings are a fluid measure of popularity and can be influenced by many factors. Breaking news, popular guest bookings, and competing programs across the dial can shuffle the numbers. But the performance of Maddow’s show after being put to the test by Fox’s highest ratings draw is significant. It shows that quality journalism will find its audience. And even if Fox News has a built-in cult status for tunnel-blind partisans on the right, it isn’t enough to overcome well produced, researched, and presented reporting that is honest and touches the lives of all Americans.