The nation, and the world, are presently enveloped in a myriad of potential catastrophes. For example: nuclear war with North Korea; tax reform; natural disasters; terrorism, etc. Under the circumstances, you might think that Donald Trump would seek to focus on any of those critical issues. If so, you don’t know Donald Trump. True to form, the President has managed to shine a spotlight on one of his biggest embarrassments. 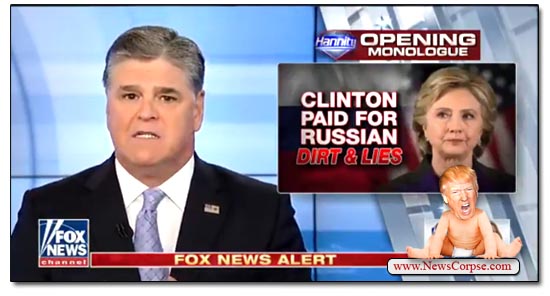 The now infamous Trump Dossier is a treasure trove of salacious and politically damning information. Much of it is speculative, but much has also been vetted and independently corroborated. The former British spy who compiled it is considered reliable by many intelligence agencies, including those in the United States. And if there is one scandalous controversy that Trump should be anxious to ditch, it’s the one that has him cavorting with Russian prostitutes. But for some reason, the Twitter obsessed President can’t resist his self-destructive urges:

"Clinton campaign & DNC paid for research that led to the anti-Trump Fake News Dossier. The victim here is the President." @FoxNews

Poor Donnie, Always the victim. And now he’s helping to remind America of his alleged escapades in Moscow with a different kind of golden shower than the one in his Manhattan penthouse. Trump is reprising this story because the Washington Post just published an article that ties Democrats to the Dossier. The only problem with this breaking news is that it was broken a year ago. In October of 2016, David Corn wrote for Mother Jones that the Dossier’s author had been “researching Trump’s dealings in Russia and elsewhere.” In his article Corn noted that:

“This was for an opposition research project originally financed by a Republican client critical of the celebrity mogul. (Before the former spy was retained, the project’s financing switched to a client allied with Democrats).”

So what began as opposition research for the GOP was taken up by Democratic operatives. That’s probably because the findings included “troubling information indicating connections between Trump and the Russian government.” Also, sources alleged “an established exchange of information between the Trump campaign and the Kremlin of mutual benefit.” But in any case, the Democratic connection was obviously known long before WaPo’s “scoop.” It was even known by wingnut propaganda dispensers at Fox News. Trump fluffers like Sean Hannity and Tucker Carlson have long been peddling this partisan snake oil.

So it’s ironic that Trump is now relying on the “fake” news purveyors at WaPo for his smear campaign info. His tweet Wednesday morning credited Fox News with the data. However, there’s a bigger question here. Do Trump and Fox News really think it’s noteworthy that Democrats might have funded opposition research against their opposition? Isn’t that what all campaigns do as a matter of routine? When Fox’s Jeanine Pirro was defending Trump, Jr. for meeting with Russians during the campaign she bragged that:

“As someone who’s run for office five times, if the devil called me and said he wanted to set up a meeting to give me opposition research on my opponent, I’d be on the first trolley to Hell to get it. And any politician who tells you otherwise is a bald-faced liar.”

In fact, Trump said pretty much the same thing:

Most politicians would have gone to a meeting like the one Don jr attended in order to get info on an opponent. That's politics!

Now suddenly it’s an abomination for Hillary Clinton’s campaign to engage in opposition research. The hypocrisy is palpable. But the objective for Trump and his pals at Fox News is to conflate this old, non-story with the more relevant allegations of Trump’s collusion with Russia to interfere with the 2016 election. And it’s a talking point that was distributed to all of the network’s programs. Already the subject has been covered by Pirro, Tucker Carlson, Bret Baier, Bill Hemmer, and, of course, Sean Hannity. For his part, Hannity helpfully stirred the recollection of the most depraved portions of the Dossier:

“The Democrats, media, they were happy to repeat, for example, that ‘Oh, Donald Trump was at the Ritz in Moscow and he had hookers urinating in his bed.’ […] All of this makes the Clinton campaign and the DNC complicit in spreading Russian propaganda and Russian lies about then-candidate, Donald Trump.

You have to wonder why Hannity thought that would benefit his buddy Trump. He could have simply talked about the Dossier in disparaging terms and left it at that. But no. This genius thought visualizing Russian hookers urinating on Trump had to be a feature of the broadcast. Never mind that the entire story involving who paid for some routine opposition research doesn’t even come close to the scandal of enlisting Russians to tamper with an American election. Clearly they are pretending to be more interest in who paid for it than what’s in it. But all of this just illustrates how desperate they are to deflect from the real news and to attack their perennial foe, Hillary Clinton, who holds no office and says she never will.