In its ever vigilant mission to misrepresent political discourse, Fox News frequently seeks out spokespersons for constituencies that don’t really exist. It’s a significant part of their determination to create more division and partisan rancor. One of Fox’s favorite methods of bending reality to their own prejudices is to latch onto alleged Democrats who will betray their party to back some ill-advised nonsense proposed by Donald Trump. 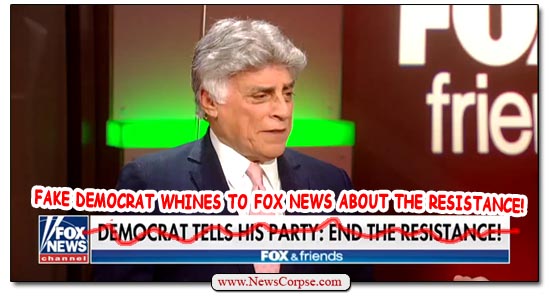 Fox News is particularly good at finding such political turncoats. Some are angry about a pet project that may have been ditched. Others are simply looking for attention. By promising them segments on the cable network to broadcast their personal rage, Fox gets them to publicly oppose their peers. And Fox gets to promote their own biases as told by supposed Democrats or liberals. In some cases the association is tenuous. For instance, Fox continues to identify right-wing zealot Pat Caddell as a Democratic pollster years after he abandon any semblance of Democratic politics.

On Saturday Fox News found another dubious Democrat to advance their promotion of Trump. Andrew Stein was once a New York City Councilman, but way back in the nineties he openly courted Republicans when he briefly ran against David Dinkins for mayor. More recently he pleaded guilty to charges related to his involvement in a multimillion-dollar Ponzi scheme. However, as the self-declared president of “Democrats For Trump” (an organization that doesn’t appear to exist) Fox News was thrilled to give him some valuable airtime.

Stein was interviewed by Fox’s Ed Henry on Fox and Friends (video below). He began the segment by accusing Democrats of having “Trump Derangement” for not being able accept that he was elected. When Henry asked Stein what advice he would give to “his fellow Democrats,” Stein offered this:

“Democrats are making a big mistake by just ‘resisting,’ talking about impeachment. It’s nonsense. This President has one of the best records I’ve ever seen. And I’ve been around a long time.”

Stein went on to praise Trump’s tax scam bill, particularly for how it benefits corporations. As if that were ever the focus of Democratic principles. Henry noted that Stein had recently spent half an hour with Trump in the Oval Office, which is undoubtedly how he came to the attention of Fox News. And when asked how Trump might do a better job of reaching out to Democrats, this fake Dem responded that:

“I think he’s done a fantastic job with this tax bill and with cutting regulations.”

Huh? You mean the bill that not one Democrat voted for? The one they weren’t allowed to contribute to or to offer amendments? The one they weren’t even allowed to see until a few hour before the vote? The one that violates every core value that Democrats hold dear by cutting taxes for the wealthy, making everyone else pay for it, and is also another GOP attempt to sabotage ObamaCare? That’s what Stein thinks was a “fantastic job of reaching out”?

There simply are no words.

Andrew Stein (D): "Democrats are making a big mistake by just 'resisting'… It's nonsense. This President has one of the best records I've ever seen." pic.twitter.com/6LVfJo9ClD