It goes without saying that there has long been a fusion between Fox News and Republican politics. It’s an embrace that gets tighter every day. And it isn’t just that Donald Trump (a former Fox News regular guest on Fox and Friends) tweets a nearly daily regurgitation of what he just saw on the network. There has been a flow of personnel that spins through the revolving door of these propaganda partners. 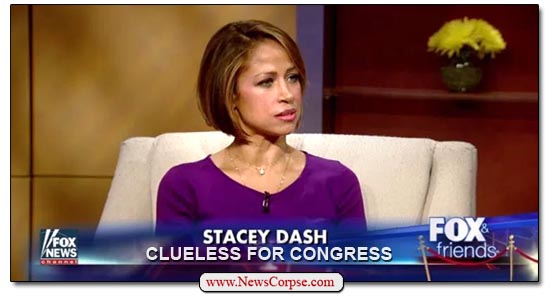 The latest flare up of this incestuous intertwining is the announcement of a campaign for a California congressional seat. The candidate is Stacey Dash, best known as the has-been still trying to suck some celebrity out of having appeared in the 1995 teen romp, “Clueless.” The springboard for her budding political career, though, was her brief tenure as a panelist on “Outnumbered,” Fox News’ misguided attempt at programming for women.

Dash distinguished herself on the show as an African-American woman who showed blatant disdain for African-Americans and women. She adopted the KKK’s position that there shouldn’t be a Black History Month because there wasn’t also a White History Month. She ridiculed the #OscarsSoWhite movement that was critical of the lack of diversity in Hollywood as “ludicrous.” She blamed the gender wage gap problem on women themselves for being such poor negotiators. Even worse, she blamed “naughty” women for many of the charges of sexual harassment and assault.

Clearly Dash represents a segment of the black and female population that only exists in congregations of white supremacists. Which makes it all the more curious that she is running in California’s 44th district that includes Compton and Watts. The district is presently represented by Democrat Nanette Barragán, and Hillary Clinton carried it in 2016 with 83 percent of the vote. But if Dash chose it because she thought her race would be a factor, she apparently doesn’t know that the district is 69% Latino.

So what’s the basis for her campaign? The only thing she has going for her is her fading celebrity and her connection to Fox News. But with regard to the latter, her contract was not renewed (aka: she was fired) more than a year ago. Never mind that there is a pretty small audience for Fox among the residents of the 44th. What there is may not remember her from her network gig. Aside from her anti-black and anti-woman stances, she would probably only be remembered for having said that President Obama didn’t “give a shit” about terrorism. Oh yeah, and there was that Playboy pictorial she did. So . . .

Late last year Fox News was floating senate campaigns for Ted Nugent and Kid Rock. Another couple of loudmouth has-beens who eventually chickened out of running. But if Dash proceeds with this foolish campaign she is going to suffer a debilitating embarrassment. It’s hard to imagine what advice she received that compelled her to file for the race. She might get some free airtime on Fox if she still has any friends there. But, as noted above, that won’t help her in this district. And Fox would be making a mockery of their frequent and hypocritical complaints about celebrities venturing into politics. Not that Fox has ever been shy about diving head first into hypocrisy.