As the midterm election gets closer, Fox News is rethinking their programming strategy. Whereas they used to air all of Donald Trump’s cult rallies in full and uninterrupted, they are now skipping them in favor of their regularly scheduled propaganda. The White House says that they are going to “look into” this betrayal by their State TV division. 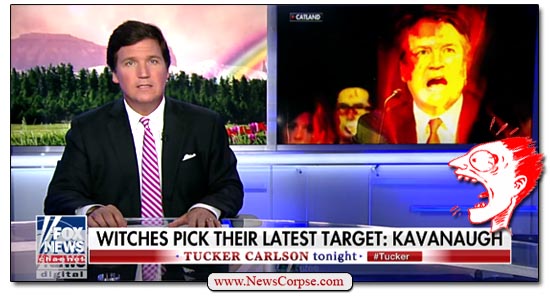 Apparently the lower ratings and loss of ad revenue was hitting them where it hurts. Plus, by foregoing the live show they can selectively edit clips from Trump’s public tantrums to remove the most embarrassing parts. That leaves them free to embarrass themselves with the juvenile ravings of their Lunatic Fringe Players in Fox primetime.

Chief among the cast of Fox’s unreality circus of Trump-fluffers is Tucker Carlson. His show has become the official mouthpiece of America’s white supremacists. He spends most of the hour with a curious expression on his face that is part confusion and part disgust for his victimized guest.

However, on Friday evening, Carlson managed to sink to a new level of absurdity with a segment attacking Democrats – and particularly women – as practitioners of the dark arts. The discussion was marginally about opposition to the confirmation of Brett Kavanaugh. But there was a much more sinister tangent that Carlson felt compelled to explore. His theme for the night was that “The party that conducts witch hunts also conducts witchcraft.” (video below)

“The question now is, is Kavanaugh’s powerful legal mind strong enough to withstand the forces of witchcraft? It’s a real question now. A coven of self-described witches in New York is planning a rally next week to put a hex on Justice Kavanaugh. You can buy a ticket to attend the ceremony for ten bucks. A quarter of that goes to Planned Parenthood to help them continue to fund their human sacrifice rituals.”

Let’s just set aside Carlson’s crass and offensive attack on Planned Parenthood as standard right-wing assholiness. What’s really important here is that Carlson has broken the liberal coven conspiracy wide open. No wonder Fox News has stopped covering Trump’s Kool-Aid parties live, when they have probing investigations like this to report. And lest you think that this is just some comic relief on Carlson’s part, note that he called it “a real question” and later said that “I think it’s the creepiest thing I’ve ever heard. And by the way, what if it’s real? I’m serious!“

With Trump’s public appearances becoming tedious affairs that the public (and Fox News) is tuning out, and Kanye West is the best hope the Republicans have for exciting their base, they are resorting to desperate tactics like this to avoid a bloodbath on November 6th. It’s such a dimwitted strategy that you have to consider the possibility that it was a witch’s spell that compelled them to pursue it.

One thought on “Fox News Exorcist Tucker Carlson Exposes the Witches of the Democratic Party, and He’s Serious”