It’s only been three days since Donald Trump’s obedient lackey in the Justice Department, Attorney General William Barr, released his redacted version of the report by special counsel Robert Mueller. Barr’s alleged “press conference” thoroughly distorted the content of the report and cemented his reputation as a dishonorable shill. 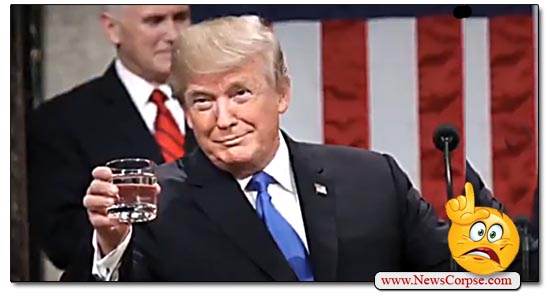 However, it’s Trump himself who has gone completely overboard with wild-eyed ranting about the report. He is at once lambasting it as a hoax that should never have happened, as well as a conclusive vindication of his glaringly obvious crimes. So naturally he spent his regularly scheduled Saturday Morning Tweetstorm demonstrating the severe mental infirmities that have become the hallmark of his presidency. You might say that he “moved on it like a bitch.” He began with this:

Despite the fact that the Mueller Report should not have been authorized in the first place & was written as nastily as possible by 13 (18) Angry Democrats who were true Trump Haters, including highly conflicted Bob Mueller himself, the end result is No Collusion, No Obstruction!

Mueller is a life-long Republican who was appointed by a Republican acting Attorney General who was appointed by Trump. But in Trump’s “very large a-brain” (his own words) it’s still some sort of deep state conspiracy against him. And now he can’t even keep track of the number of “Angry Democrats” amongst the “Trump Haters” (Fact Check: It’s about 63,000,000). And then there was this:

The Fake News Media is doing everything possible to stir up and anger the pols and as many people as possible seldom mentioning the fact that the Mueller Report had as its principle conclusion the fact that there was NO COLLUSION WITH RUSSIA. The Russia Hoax is dead!

First of all, No one is doing more to “stir up and anger the pols and as many people as possible” as Trump. In fact, it’s practically all he does with his incessant rage-tweeting and lie-riddled comments at his staged photo-ops. And if he really thinks that the “principle conclusion” of the Mueller report was that there was “no collusion,” he’s more deranged than anyone imagined. Even Fox News’ senior legal analyst agrees with the Democratic chairman of the House Intelligence Committee, Adam Schiff, that there is evidence of collusion and obstruction of justice. And for an alleged hoax that is allegedly dead, Trump can’t stop whining about it. And then there was this:

The end result of the greatest Witch Hunt in U.S. political history is No Collusion with Russia (and No Obstruction). Pretty Amazing!

True to form, Trump praises the “Witch Hunt” against him as “the greatest Witch Hunt in U.S. political history.” Of course it is. I know it. You know it. Everybody knows it. No one does better witch hunt than Trump. Believe me. And, according to Trump, the “end result” of the Mueller report manages to be “no collusion” despite the voluminous references to meetings with Russians, pathological lying, and flagrant obstruction of justice. That really is “Pretty Amazing!” And then there was this:

Why is our supposedly tea-totalling president toasting (himself probably) with a cocktail? But more to the point, what’s with that cheesy propaganda video? The lies that Trump stuffed into it shouldn’t surprise anyone. It’s just a tedious rehashing of what he tweets ad nauseum.

What should bother the American people is that he spends our tax dollars on bullshit like this. This is the true “Presidential Harassment,” but not the sexual kind that he’s so well known for. And not the kind that he panic-tweets about so much (here and here and here). Sadly, he has an army of Deplorables who actually suck up these perverse ravings without swallowing. Pretty Amazing!

2 thoughts on “Trump Thinks the Mueller Report is a Woman, That’s Why He’s ‘Moving On It Like a B*tch’”