The fact that Donald Trump is suffering from a crushing array of delusional departures from the real world is unarguable. He regards himself as “The Chosen One.” He believes that only he can solve America’s problems (despite the fact that he’s failed to deliver on his campaign promises), In his warped mind he knows more than anyone on every subject. And these delusions are separate and apart from his ceaseless lies (more than 12,000 so far). 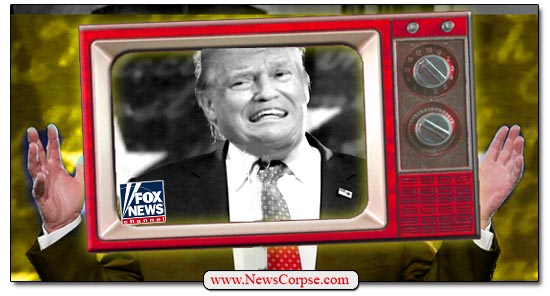 However, there is a common thread that weaves through much of the hallucinatory fallacies that clutter his emotionally and intellectually stunted brain. He has an all-consuming fetish with his perceived popularity. Crowd size seems to be a stand-in for his virility. And often his craving for attention is manifested in his obsession with polls. But unfortunately for him, they mostly reflect how bitterly despised he is by most Americans. Even polls from Fox News and his favorite ultra-biased pollster, Rasmussen, show him in dire straits.

But polls are just the political equivalent of a mode of survey that Trump has had much more exposure to: The Nielsen Ratings. His fourteen years as the host of a reality TV game show has permeated his world view. And it is the prism through which he sees everything related to his life and presidency. This contorted mindset produced a Sunday morning tweet attacking sitcom star Debra Messing:

I have not forgotten that when it was announced that I was going to do The Apprentice, and when it then became a big hit, helping NBC’s failed lineup greatly, @DebraMessing came up to me at an Upfront & profusely thanked me, even calling me “Sir.” How times have changed!

Here Trump is renewing his competition with other celebrities while also wholly inventing their alleged admiration for him. (I’d bet the limit at the Trump Taj Mahal that Messing never called him “sir”). He’s also demonstrating that he gauges his self-worth by his comparison – not to other presidents – but to other Hollywood luminaries. That’s his benchmark of approval. What’s more, he measures the value of news media by the same criteria. It isn’t insight or knowledge or experience that validates the media. It’s ratings. Which is why Trump also tweeted this tribute to his pal Sean Hannity:

Has anyone noticed that the top shows on @foxnews and cable ratings are those that are Fair (or great) to your favorite President, me! Congratulations to @seanhannity for being the number one show on Cable Television!

First of all, Hannity is not the number one show on cable television. It’s the number one “news” show on cable television, which is a much smaller set of programs. Secondly, Trump isn’t the “favorite president” of anyone but his glassy-eyed cadre of Deplorables. But more importantly, there is no significance to the fact that the Fox News Trump-fluffers in primetime have higher ratings than the rest of the network’s programming. There’s a reason that time is called “prime.”

What Trump is doing here is trying to rescue himself from some painfully idiotic comments made last week admonishing Fox for failing to be 100% adoring. In a fit of hurt feelings he ordered his cult followers to “start looking for a new news network” because Fox “isn’t working for us anymore.” This was his way of reassuring Hannity that he still appreciates his up-sucking.

Trump’s intense focus on ratings is evidence that he has never left the realm of television ranking and marketing. Nothing matters to him except for how he is perceived by the standards of Hollywood. That explains why the only thing that was important to him about his visit to the hospital in El Paso where shooting victims were recovering was making sure that everyone knew how much he was loved. He wasn’t. In fact every patient refused to see him.

Trump’s single-minded concentration on ratings is matched by the market positioning of Fox News. They place a similar weight of stature on numbers, rather than quality or honesty. That’s because they have long considered themselves to be part of the entertainment sector of television, not news. Their late, disgraced CEO, Roger Ailes, even admitted it, dismissing his news competition to tell the Hollywood Reporter that “We’re competing with TNT and USA and ESPN.” And the product they put on the air proves that. Even the Fox News website promotes their programs as entertainment, rather than news. That particular promotion was for Tucker Carlson, who Fox thinks people should watch because he’s such an asshole.

Fox News has redefined television “journalism” by fundamentally transforming it from an information medium to an entertainment medium. They dress up their pseudo-news segments in the same reality TV, soap opera packaging that entertainment outlets use: conflict, scandal, mystery, and hyper-charged emotions including hero worship and fear. Fox employs flashy graphics and attention-grabbing audio whooshes and gongs to decorate their reports that are presented as ‘ALERTS’ regardless of the news value. And always there is sex. Fox’s roster of hosts has more former beauty pageant contestants that journalists.

So Fox News is the perfect chronicler of the bizarre presidency of Donald Trump. They are, in fact, recording the trials and tribulations of a fictional character, that they helped to invent, as he stumbles through his sappily scripted, melodramatic existence. And Trump embraces that rendering of his White House antics. It’s playacting on a world stage. The problem is that for the rest of the world’s inhabitants it’s all too real and frightening and dangerous. This show needs to be canceled ASAP if the we want to survive until next season.

One more thing, just for fun: In October of 2009, the Daily Show with Jon Stewart covered this subject in a brilliant and hysterical segment entitled “FOR FOX SAKE! Fox News defends itself against an attack by the Obama administration by explaining that most of their shows aren’t real news.” ENJOY!