Happy New Year to America and the world. We are now embarking on a new decade whose beginnings will likely be tumultuous, maddening, and occasionally hilarious. By the end of 2020 we will hopefully have a new president preparing to move into the White House. Maybe sooner if Republicans decide to put country before party and decency before dishonesty, decadence, and corruption. 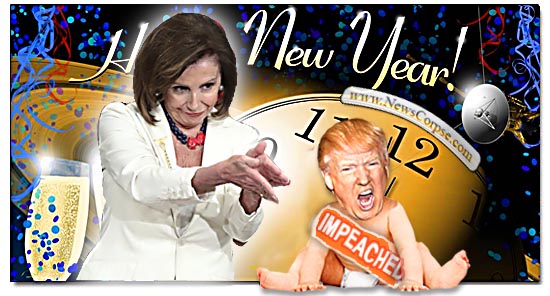 The past year was a wild ride with an unprecedented number of scandals emanating from the White House. The sheer quantity of political atrocities would be mind boggling if it wasn’t so predictable with an ignorant, childish, narcissist leading the way to perdition. And this uncommonly aberrant year concluded with Trump’s impeachment for “Abuse of Power” and “Obstruction of Congress.” This marks him forever as the first reality TV show host (and only the third president) to have been impeached. That’s not exactly how he thought it would end when he tweeted his all-caps New Year’s message a year ago:

This year Trump tweeted a more diffident and compact “HAPPY NEW YEAR,” but he also posted a ten minute video of himself at Mar-A-Lago adding to his year-end compilation of lies (video below if you have the stomach for it). But don’t expect the Twitter patter of Trump’s sheepishness to last. With both the Senate’s impeachment hearing and a national election on the horizon, Trump’s surly mood will undoubtedly return with the gusto of starving MAGAts in a bucket of KFC extra crispy.

One thing Trump will can rely on is that Fox News will be there in 2020 to shield him from criticism and to smear his foes, just as they were in 2019. It was a banner year for the Trump-fluffing network as they insured that their audience would remain ill-informed and blindly loyal to Dear Leader Trump. This was done by coordinating closely with the White House to manufacture flagrantly dishonest stories that bore no resemblance to either reality or journalism. What follows are few of the more notable examples of how Fox News poisons the political environment while sucking up to their malignant messiah:

This is the sort blatant puffery that is generally observed in the propaganda ministries of totalitarian regimes. Fox News long ago abandoned any pretense of being a neutral news provider. They are as much a part of Trump’s administration as Kellyanne Conway, Mick Mulvaney, and Ivanka. And that will surely continue into the new year as they attempt to deceive their glassy-eyed viewers with ever more outlandish fiction that exalts Trump and spellbinds the cult that surrounds him.

4 thoughts on “The Bottom 10: A Year of Derp from Trump’s Ministry of Propaganda, Fox News”