Here we go again. In 2016 the press disgraced itself by falling victim to the reality TV campaign of Donald Trump. They broadcast every rally and public address live and uninterrupted as if it had some news value. It didn’t. They were just providing Trump with millions of dollars of free air time. 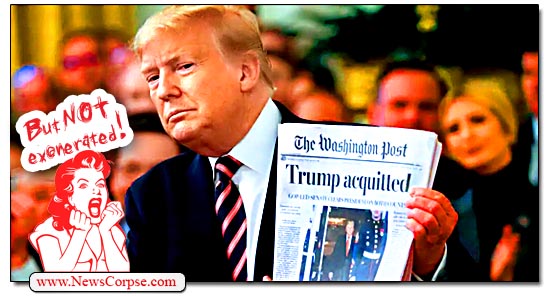 The press utterly failed in its journalistic obligations during the 2016 campaign with their fixation on a candidate that stuffed his speeches full of lies, insults, and self-exaltation. Their preference for featuring Trump’s cult rallies was blatantly unfair. They were not giving the same amount of time or exposure to any of his opponents during the Republican primary or the general election. Some of the media recognized their profoundly biased and unprofessional conduct after the election and even apologized to the nation for letting them down.

Well, they seem not to learned a damn thing. On Thursday morning Trump gave an address from the White House that he previously tweeted would be “to discuss our Country’s VICTORY on the Impeachment Hoax!” That preview was bad enough, serving as a warning that the speech would be a feast of falsehoods and a celebration of having escaped accountability for his obvious crimes.

Why would the press rush to cover something that Trump himself falsely described as the “country’s victory” and a “hoax”? He telegraphed his intention to exploit the event for his own selfish purposes. And that’s exactly what he did.

The hour plus speech was a rambling disgorgement of a bloated ego combined with back-slapping of the sycophantic, Republican bootlickers in the audience. Trump rattled off the names of every Trump-fluffing apologist who ran his defense in Congress. and he told brief stories about how brilliant they were for adoring him.

Of course, Trump also used this time to lash out at his perceived enemies. He repeated his tiresome charge that he was the victim of a “witch hunt.” He revived his obsession with President Obama, baselessly alleging that “a lot of people would have been in jail” if he had his way. He rehashed the Mueller probe, calling it “bullshit” despite the fact that it affirmed numerous breaches of the law and blatant obstruction of justice. He went off, again, on America’s intelligence community, complaining about “dirty cops” and other evil people. He singled out former FBI Director James Comey for special condemnation, calling him a “sleazebag.” This is the behavior of a “president” whose cult followers are currently denouncing the “decorum” of House Speaker Nancy Pelosi for tearing up a copy of his Dystopian State of the Union speech.

But he wasn’t nearly through. He slandered House Intelligence Committee Chairman Adam Schiff as “corrupt” and a “vicious, horrible person.” Trump unwound his frequent lie that Schiff had misrepresented his remarks in the phone call with Ukrainian President Zelensky. He continues to insist that people read the memo that he calls a “transcript” of the call, even though it clearly indicates that he extorted Zelensky to get dirt on Joe Biden.

Naturally, Trump didn’t forget to attack Pelosi. He called her a horrible person also. But he went on to make reprehensible remarks about her faith, asserting that he “I doubts she prays at all.” Earlier in morning he made similar remarks the National Prayer Breakfast, where he attacked Mitt Romney’s faith as well, saying that he “used religion as a crutch.” and that “I don’t like people who use their faith as justification for doing what they know is wrong.” This, coming from someone who pretends to be a devout Christian but can’t cite a single passage from the bible and brags that he has never asked god for forgiveness because he’s never done anything wrong.

The entire address was nothing but a propaganda filled campaign rally with an audience of StormTrumpers engaged in idol worship. It allowed Trump to lie about being exonerated (he wasn’t) and to malign his critics for a solid hour without any pushback, fact-checking, or concessions to reality. And the media chose to air the whole thing live and without interruption.

For what purpose? There was nothing remotely newsworthy about it. They could have have easily recorded it and aired it later if they found anything that served the public interest. And then they would also have been able to provide context and corrections of his numerous untruths. If this is any indication of how they are going to cover the election between now and November, America is big trouble.

20 thoughts on “STFU: Why Did the Media Cover Every Word of Trump’s Post-Impeachment Gloating?”