The American people are struggling to cope with a crisis that most have never imagined. They are frightened for the welfare of themselves, their families, and their nation. And with the exception of a few misguided jackasses, they are bringing a profound measure of determination and courage to the fight to defeat the coronavirus pandemic and return to some semblance of normalcy. 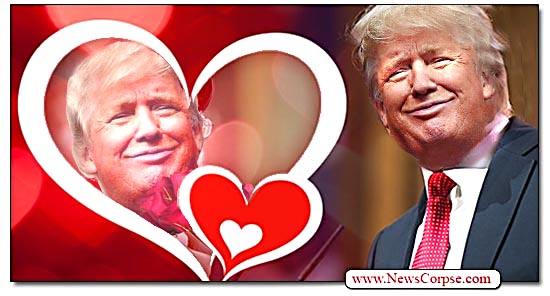 And then there’s Donald Trump. From the outset of his presidency (and actually many decades before) Trump has demonstrated that the only thing he really cares about is himself. That’s repulsive and annoying for a private citizen or a reality TV game show host, but it’s frightfully dangerous for an alleged national leader.

During Monday’s Coronavirus Task Force briefing (aka Trump 2020 Reelection Campaign Infomercial), Trump was asked “Is this really the time for self-congratulations,” with nearly 800,000 Americans infected and tens of thousands dead. He responded by callously saying that “It’s not about me. Nothing is about me.”

Of course, that’s ludicrous. His answer went on to reiterate how, in his view, he is the most put upon president ever, despite all of the miraculous accomplishments that exist only in his cartoon brain. But on Tuesday morning Trump was apparently less than satisfied with his self-exaltations, so he blasted out a series of tweets lavishing more praise on himself. For instance…

I’ve had great “ratings” my whole life, there’s nothing unusual about that for me. The White House News Conference ratings are “through the roof”(Monday Night Football, Bachelor Finale , @nytimes) but I don’t care about that. I care about going around the Fake News to the PEOPLE!

These are the ravings of a malignant narcissist whose perception of reality is deeply distorted by his voracious ego. When Trump takes credit for the ratings of the task force briefings, he is proving how little he knows about ratings. He thinks that people of all political persuasions tuning in to get information from health experts about a deadly pandemic is a reflection of his popularity. It isn’t. He has been making this mistake for several weeks and is convinced that he is the Pat Sajak of COVID-19, spinning the “Wheel of Misfortune” for bored television audiences.

More to the point, Trump openly discloses what he cares about during this time of tribulations, pretending that he doesn’t care about ratings (although he can’t stop talking about them), but that “I care about going around the Fake News to the PEOPLE!”

Trump elaborated on this theme of self-obsession in a trio of tweets posted along with the one above. In one he confessed that he watched Joe Scarborough on MSNBC and concluded that Scarborough was filled with “hatred and contempt” and that “his mind is shot.” That’s as good an example of pure psychotic projection as you’re ever likely to see.

In another tweet Trump whined that “It is amazing that I became President,” considering what he claims was the “corrupt” and “dishonest” media going after him day and night. He isn’t the only one who thinks his being elected president was amazing. But what’s really amazing is that Trump’s glassy-eyed cult followers aren’t repulsed by his constant and cowardly victimhood.

Finally, Trump bragged that he has a “96% Approval Rating in the Republican Party.” The only problem with that is that he absolutely doesn’t. He frequently posts this lie without ever providing a link to his (non-existent) source. But even if his approval was that high, Trump still doesn’t grasp that he’s not supposed to be the president of the GOP. Which isn’t going to help him in the upcoming election. In three years he’s done nothing to expand his tiny base of dimwits, but he’s determinedly sought to exacerbate division and partisan rancor.

So the most egomaniacal president ever spent much of the morning ignoring a still spreading pandemic and tweeting about himself. And his comments revealed that he cares more about that than about the welfare of the American people. But you can still expect him to show up at today’s task force briefing (that he has no business even attending) where he will resume lying, bragging, and yelling petulantly at reporters. Some things – unfortunately – never change.

2 thoughts on “Trump Reveals What He Cares About Now: ‘Going Around Fake News [to Lie] to the People’”