The Republican Party likes to pretend that they are the defenders of individual freedom in America. Of course, that is a pretense that has never true. Their vocal protestations about government being “on your back” only apply to regulations aimed at corporations and taxes on the wealthy. The GOP has no problem with government leaping onto the backs of women seeking reproductive health care, or gays who want equality in marriage and military service, or kids who want to attend school without someone else’s religion forced down their souls.

In short, the GOP wants businesses to have the absolute freedom to run rampant over a population that is straight-jacketed by federal guardians of morality. And that constricting philosophy extends to the free expression of artists as well. Conservatives have long-held the view that the creative community is dangerous and subversive, and they must be silenced. They acted on those views when they blacklisted artists in the 1940’s and 1950’s. And today they are pressing hard to shut down public broadcasting and the National Endowment for the Arts. But it doesn’t stop there.

There have been some recent incidents that ought to stir outrage among Americans who value free expression and the First Amendment to the Constitution. Public figures have been stepping on the rights of artists in an official capacity and it is repugnant and un-American. 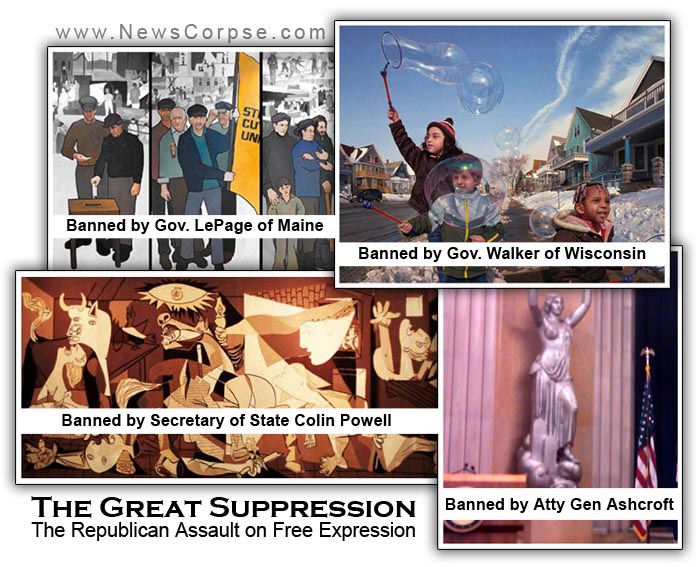 A few years ago, Secretary of State Colin Powell was scheduled to give a speech at the United Nations to make the case by the Bush administration for going to war against Iraq. Prior to the speech he had aides cover up a tapestry depicting Picasso’s painting, Guernica. Powell was not going to make an argument for war in front of such a powerful and iconic anti-war statement.

Bush’s Attorney General, John Ashcroft, held press conferences in the Justice Department in a hall where the statue “Spirit of Justice” had stood for decades. In 2002 he ordered that the statue, a female representation of justice with one bare breast exposed, be covered by a drape. It’s not clear whether he was worried more about this being embarrassing or arousing.

Earlier this year, Paul LePage, the governor of Maine, had a mural removed from the Maine Department of Labor. The mural depicted scenes of Maine’s working citizens and the history of labor in the state. Obviously it has no business taking up space in the Labor Department.

And just this week, Governor Scott Walker of Wisconsin removed a painting from the governor’s residence. The painting was of children from diverse backgrounds and was meant to remind the residents of that home, which belongs to the people of Wisconsin, of the impact their work has real families. Now Walker won’t have to be concerned with that unless he runs into some in person, in which case he’ll have much more to be concerned about.

The brazen insensitivity of public officials censoring messages that were meant to inspire openness and a devotion to service is appalling. These people are not only offending the artists and the citizens whose views are being represented, they are astonishingly tone-deaf to the political backlash that was easily anticipated.

Republicans can’t seem to get enough censorship. It weaves through the party from state houses to the White House. There is even a current speculative candidate for the GOP nomination for presidency in 2012 who has a low regard for free speech.

Rudy Giuliani: An exhibition of paintings is not as communicative as speech, literature or live entertainment, and the artists’ constitutional interest is thus minimal.

That was Giuliani arguing in court to ban artists from displaying their work on the streets of New York City. His argument is that, while evangelists predicting the end of the world and banjo pluckers strumming out strains of My Clementine are protected by the Constitution, artists are not. That’s all America needs now is a president who doesn’t think that art is communication or that it is protected by the Constitution. Welcome to the Dark Ages.

One thought on “The Great Suppression: Republicans Clampdown On Art”