Perhaps the most prominent of the myriad character flaws of Donald Trump isn’t his pathological lying, his infantile name-calling, his glaring ignorance, or his raging hostility. Perhaps it’s the relentless whining and victimhood that gushes from him whenever he is faced with even a mild challenge. It’s a pitiful display of the cowardice that permeates his personality, or lack thereof. No wonder Trump has bragged about being “the most fabulous whiner.” 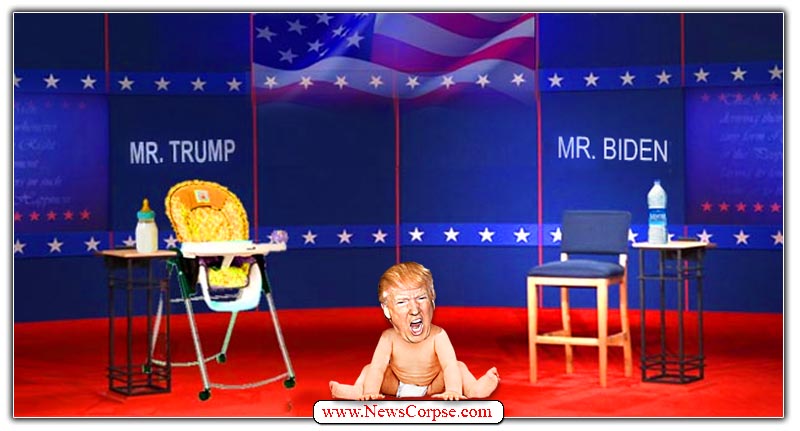 This “feature” of Trump’s emotional frailty has been evident recently in his reaction to the upcoming and final presidential debate with Joe Biden. Note that the first of the scheduled debates resulted in Trump harassing both Biden and the the moderator, Chris Wallace, with repeated interruptions. That led to the Commission on Presidential Debates implementing a new rule wherein the mic of the opposing candidate will be muted during designated two minute periods at the beginning of each topical segment. The second debate was canceled altogether because Trump was afraid to participate remotely.

In advance of the final debate before the election, Trump is ramping up his griping about how unfair everyone and everything is to him. He has been complaining for several days that the debate, like the election itself, is “rigged” against him. And on Tuesday morning he took that complaint to Fox News so he could get some sympathy from the “Curvy Couch” potatoes of Fox and Friends.

During the discussion, co-host Ainsley Earhardt asked Trump about the new rule for muting the mic. Trump replied by calling the Commission “ridiculous” and then segued to accusing them of purposely muting his mic in the 2016 debates with Hillary Clinton (which never happened). He said they are “not good people” and that “a lot of funny things go on with them.” Then he shifted to maligning the moderator of Thursday’s debate, Kristen Welker of NBC News, in a rambling word salad with an overflowing jug of whine:

“Kristen Welker is terrible, I mean she is totally partisan. Her father and mother are big supporters of Joe Biden for a long time. They’re supporters of the Democrat Party. And she deleted her entire account. […] “Kristen Welker is far worse than [CSPAN’S Steve] Scully, but I do it anyway, I do it anyway, But this is the way it is. It’s so set up.”

For the so-called “Leader of the Free World,” Trump sure behaves like a petulant toddler who doesn’t get his way. And needless to say, he is lying about Welker. She is a straight-down-the-middle journalist who doesn’t exhibit any political bias in her reporting. The party affiliations of her parents, even if true, are irrelevant. And she did not delete her Twitter account.

Trump made no effort whatsoever to support his contention that Welker “can’t be neutral at all.” What’s more, He falsely asserted that the Commission changed plans to make foreign policy the sole topic of the debate. That notion was birthed entirely in his warped imagination. The Commission’s only reference to debate topics came in their announcement on October 16, of the topics that were chosen by the moderator.

For the record, the topics are fighting COVID-19, American families, race in America, climate change, national security, and leadership. If those topics bother Trump it’s only because he knows he can’t discuss them with anything approaching coherence. Nevertheless, he sought to disparage Biden’s debating skills by telling his Fox friends that…

If Trump actually manages to muster up the discipline to let Biden talk without interrupting (doubtful), he will be sorely disappointed as Biden demonstrates far a superior grasp of the issues and a relatable empathy for the American people. In fact, Trump’s strategy would work much better for Biden. Just let Trump talk. The more people hear him, the more they despise him. Every time Trump opens his mouth Biden’s lead in the polls gets bigger. So please proceed, Donnie.

UPDATE: Trump is proceeding with his manic media maligning. He reportedly stomped out of an interview for 60 Minutes with Leslie Stahl, and is now berating her as biased.

Trump threw another tantrum. And he attacked Leslie Stahl for not wearing a mask in a 5 second clip. Wonder why it was only 5 seconds? That's probably all she had the mask off for. 60 Minutes is gonna be fun this Sunday.https://t.co/OV5Nsdyus6