As the nation continues to suffer through a wave of surging coronavirus infections, hospitalizations, and deaths, Donald Trump remains distant and uncaring. He is still obsessed with proving that he beat Joe Biden by a landslide, despite failing to provide any evidence of it and losing more than sixty court cases challenging the election. 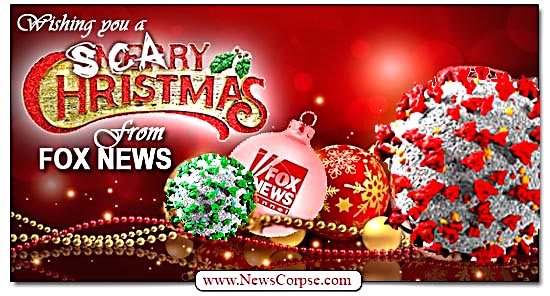 Naturally, Fox News is feeling acute remorse on Trump’s behalf. But like him, they couldn’t care less about the American people who are struggling with a deadly health crisis and the economic calamity that accompanies it. On Wednesday evening, Fox’s Laura Ingraham presented a segment that demonstrated just how heartless – and dishonest – she and her network can be. As if that hasn’t been made clear a thousand times in the past year.

The segment featured graphics complaining about “Medical Tyrants Stripping Personal Freedoms,” and that the “Medical Establishment Declares War on Christmas.” You have to admire Ingraham’s ability to malign doctors as both tyrants and anti-Christmas warriors. The rant began with Ingraham blaming the entire “medical cartel” abomination on Biden, who won’t be president for another month (video below):

“While Biden outsources our freedoms to China, he’s gonna let the medical cartel eviscerate your personal liberties here at home. Now remember all those warnings about traveling during Thanksgiving and getting together with friends and family? I guess they didn’t celebrate in the Midwest and great plains because cases in those regions are plummeting. Well, of course they celebrated. These predictions often don’t come to pass.”

If you remember all the warnings about traveling during Thanksgiving, then you should be aware that such gatherings actually did contribute to the spike in COVID-19 infections. In fact, by every measure the pandemic is far worse now than at any time since it first appeared. Ingraham cherry-picked a region wherein there was some temporary decline, but she ignored the national data that refutes her preposterous contention that cases and deaths are “plummeting.” To the contrary, they are accelerating at a frightening rate.

Our daily update is published. States reported 1.8 million tests, 231k cases, and a record 3,400 deaths. There are 113,069 people currently hospitalized with COVID-19, a new record for hospitalizations. pic.twitter.com/UBkhbQa909

Following her counterfactual prologue, Ingraham conducted an interview with disgraced, “herd immunity” advocate, Scott Atlas, who has no credentials in infectious diseases and whose views are so far removed from the credible medical community that he was ousted from Trump’s coronavirus task force. He told Ingraham that it was pointless to limit business and social contacts because that change in behavior doesn’t have any effect. What’s more, he claimed that “80 to 90 percent of people have been wearing masks” and it hasn’t helped.

For the record, those numbers are only for certain outdoor, public activities. For indoor activities, including holiday celebrations, mask compliance is only about 56 percent. And in any case, all the available scientific study proves that masks are effective for preventing virus transmission.

For Ingraham to be putting out these lies and disinformation while more Americans are dying than ever, is beyond irresponsible. She is an accessory to mass murder. And Fox News, who just signed her to a new, multiyear contract extension, is no less culpable. They are spreading what PolitiFact just designated as the “2020 Lie of the Year.” And they are doing it all in conjunction with Trump’s campaign to downplay the pandemic’s tragic consequences in order to absolve himself of the guilt he deserves for his negligence, incompetence, and deliberate malfeasance.