President Biden’s long anticipated address to Congress was delivered Wednesday night with the grace, compassion, and appeal for unity that has become the hallmark of Joe Biden’s presidency 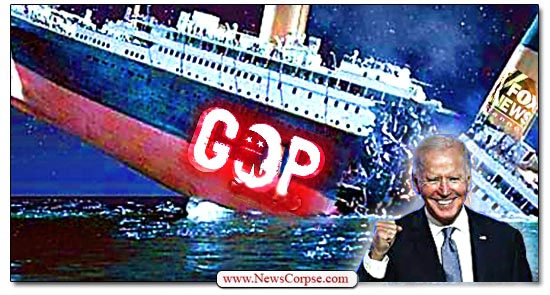 Biden spoke to the full array of issues that have been at the top of the American people’s list of priorities, including the coronavirus pandemic, economic recovery, jobs, climate change, healthcare, infrastructure, race, police reform, education, tax equity, gun safety, immigration, and foreign policy. It was a speech that radiated the calm resolve of a confidant and competent leader, as opposed to the fire-breathing bluster and lie-riddled babbling of the Former Guy, Donald Trump.

Apparently, the American people are relieved to finally have a sane president after four years of lunacy, incompetence, rancor and chaos. They appreciated hearing a speech that wasn’t crammed with flagrant falsehoods, vicious insults, and the pathological, undeserved bragging of malignant narcissist.

However, it didn’t take long to be reminded of the GOP’s way outside Trumpian view as Sen. Tim Scott of South Carolina stepped up to deliver the Republican response (video below). He began by throwing some passive-aggressive shade saying that “We just heard President Biden’s first address to Congress. Our President seems like a good man. His speech was full of good words.”

“Seems like” a good man? That’s the sort of backhanded “compliment” someone might say about Ted Bundy. Scott went on to disparage Biden’s promise to “unite a nation,” “lower the temperature,” and to “govern for all Americans.” “But three months in,” Scott complained without any basis, “the actions of the President and his party are pulling us further apart.”

Scott also vowed that he wouldn’t “waste your time tonight with finger-pointing or partisan bickering.” What came next was fourteen minutes of finger-pointing and bitterly partisan rhetoric. For instance:

“Democrats wanted to go it alone. They spent almost $2 trillion on a partisan bill that the White House bragged was the most liberal bill in American history!”
That was the COVID relief and stimulus bill that had the support of 76% of the American people, including 60% of Republicans.

And yet, every single Republican in Congress voted against it.

“Less than 6% of the President’s plan goes to roads and bridges. It’s a liberal wish-list of Big Government waste… plus the biggest job-killing tax hikes in a generation.”
Except that most analysts agree that the broadly popular plan would create millions of jobs in emerging technologies that transcend the conventional and crumbling definition of “infrastructure.”

“Tonight we also heard about a so-called ‘Family Plan.’ Even more taxing, even more spending.”
More Republican “tax and spend” talking points. Never mind that most voters (64%) want corporations and the wealthy to finally pay their fair share. And once again, that includes a majority (53%) of Republicans.

“Now, he says your tax dollars should fund abortions. He’s laying groundwork to pack the Supreme Court.”
These are not just GOP talking points, they are blatant lies.

“Democrats used the filibuster to block the debate from even happening.”
It’s always cute when Republicans project their own flaws onto others. Their rampant obstructionism when they held the Senate majority reached unprecedented levels. And if the GOP is upset that Democrats used the filibuster to block legislation, then why are they complaining when Democrats are volunteering to abolish it?

“Republicans support making it easier to vote and harder to cheat.”
They have a funny way of showing it. They are passing bills across the country to suppress and/or disenfranchise voters, especially people of color. And they still can’t show any evidence of any significant voter fraud.

“Our best future won’t come from Washington schemes or socialist dreams.”
You can’t have a Republican rant without throwing in baseless allegations of socialism. Even though they don’t know what it means. To them it’s just a buzzword intended to stir irrational fears.

However, perhaps the most disturbing part of Scott’s harangue was when he raised the matter of race. As the only Black Republican in the Senate he has some license to speak on the subject. Sadly, he wasted it. He forcefully beseeched the nation to “Hear me clearly: America is not a racist country.” But that came just two minutes after relating this real-world experience of most Black Americans:

“I have experienced the pain of discrimination. I know what it feels like to be pulled over for no reason. To be followed around a store while I’m shopping.”

So which is it? it’s hardly possible to undergo those indignities and prejudices in a country that isn’t racist to some notable degree. And add to that the way too frequent incidents of police shootings of Black people; the recent Capitol insurrection that featured Confederate flags and rioters shouting epithets at Black officers; the growth of white nationalist groups and militias. At least Biden actually referenced that brand of domestic terrorism in his speech, saying that…

“We won’t ignore what our own intelligence agencies have determined – the most lethal terrorist threat to the homeland today is from white supremacist terrorism.”

The speech by Scott could have been written by Donald Trump, or more likely one of his speech writers, since Trump is borderline illiterate. It was hostile, dishonest, and littered with right-wing rhetoric and invective. There wasn’t a hint of any policy proposals because Republicans don’t have any actual ideas other than hating on Democrats. That was the resounding message contained in the GOP response. And the American people saw it and will have their own response when election time comes again.