Donald Trump simply refuses to let a single day go by without contaminating every public debate with his diseased and delusional misperceptions of the world. And Saturday was no different as he spoke at the ultra-rightist Conservative Political Action Conference (CPAC). His address to the CPAC crowd was predictably riddled with lies and exaltations of himself. 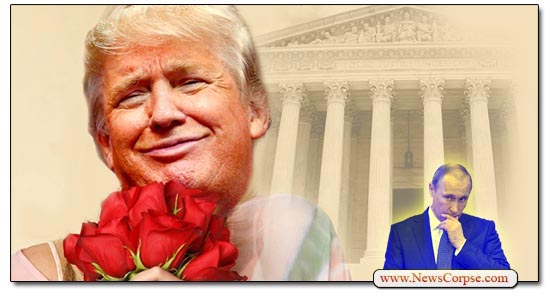 Among Trump’s preposterous observations was a reprise of his theory for why Vladimir Putin invaded Ukraine. According to Trump it was because of the “rigged” 2020 presidential election. Because what atrocity isn’t the result of that throbbing thorn in his tiny paw? He also tried to sell the absurdity that Putin wouldn’t have invaded Ukraine if he was still president. Although there’s some kernel of truth to that. Putin wouldn’t have needed to invade Ukraine because Trump was giving him all the things he wanted the invasion to produce: weaken NATO and the EU, expand Russia’s sphere of influence, sow discord among Western allies, and throw American democracy into disarray.

True to form, Trump elaborated on his recent comments celebrating the intellect of his hero, Vladimir, whom he regaled as “smart,” “savvy,” and a “genius.” He told his glassy-eyed cult followers that…

“Yesterday reporters asked me if I thought President Putin was smart. I said ‘Of course he’s smart.’ To which I was greeted with ‘Oh, that’s such a terrible thing to say.’ The NATO nations, and indeed the world, as he looks over what’s happening strategically, with no repercussions or threats whatsoever, they’re not so smart. They’re looking the opposite of smart.

If you take over Ukraine we’re going to sanction you, they say. Sanction? Well, that’s a pretty weak statement. Putin is saying ‘Oh, they’re gonna sanction me. They’ve sanctioned me for the last twenty-five years. You mean I can take over a whole country and they’re gonna sanction me? You mean they’re not gonna blow us to pieces, at least psychologically?’ The problem is not that Putin is smart, which of course he’s smart. But the real problem is that our leaders are dumb. Dumb!”

Trump calls Putin smart, says NATO is not so smart, and calls our leaders dumb pic.twitter.com/lEEymSPSby

First of all, Trump’s account of how he came to fawn over Putin is pure fiction. He wasn’t asked anything about this by reporters. He offered up his Putin praise unprompted at a Republican fundraiser at Mar-a-Lago. And yes, it is a terrible thing to say while the object of his affection was committing war crimes against innocent Ukrainians.

Furthermore, Trump’s assertion that there were “no repercussions or threats” from NATO allies is a deliberate distortion of reality. NATO and President Biden made it clear that Putin would suffer swift and severe consequences if he went through with his invasion plans. Despite Trump’s ignorant belittling of the impact of sanctions, most experts agree that they will critically hamper Russia’s economy and its ability to sustain an occupation of Ukraine.

Note also that Trump’s implied solution is a military response to “blow [the Russians] to pieces.” That’s the sort reckless reaction that could escalate the crisis into the next world war. and it’s typical of his faux bravado. However, during an interview with Fox News Digital at CPAC, Trump displayed his impotence when asked if he had a message to Putin. The ordinarily blustering, pseudo-strongman replied weakly that “I have no message. I just think it’s a shame that this is going on.” It’s a shame? Well, that should make Putin squirm.

Finally, Trump doubles down on his adoration of Putin’s brilliance. But this time Trump embellishes it by insulting America’s leaders as “dumb.” And again, this comes during a time of conflict wherein Trump’s views can only be seen as emboldening the enemy. No doubt his remarks will be played repeatedly on Russian television. Just like the remarks by Fox News Putin lover, Tucker Carlson.

The propaganda value of a former president of the United States favoring Putin over the current president is incalculable. Which makes it unarguably treasonous on Trump’s part. Thankfully, we have a current president who knows precisely how to smack down a paper tiger like Trump. When asked what he though of Trump’s praise of Putin’s alleged genius, President Biden replied…

“I put as much stock in Trump saying that Putin’s a genius as I do when he called himself a stable genius.”

.@POTUS on Donald Trump calling Putin "savvy" and "genius" amid Russia's invasion of Ukraine: "I put as much stock in Trump saying that Putin's a genius as I do when he called himself a stable genius." pic.twitter.com/H1Q1UVK8r9