As the situation in Ukraine grows more dire every day, Fox News grows more diarrheal, excreting vast quantities of waste matter that only matters to the deluded deplorables who are glued to the network’s lies and propaganda. And leading the discharge is Fox’s top rated Tucker Carlson, who has distinguished himself of late as Russia’s favorite American turncoat. 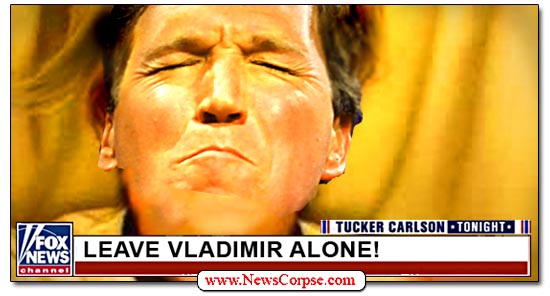 In recent weeks Carlson has itemized his reasons for why nobody should hate Vladimir Putin, even as Putin leads Russia’s murderous rampage in Ukraine. Carlson is articulating precisely the same opinion that Donald Trump has of Putin. And they both have the same infatuation with Donald Trump.

Carlson briefly tried to moderate his Putin lust. But it was such an awkward feat of hypocrisy that he couldn’t sustain it for more than a day or two. So now Carlson is back to drooling adoringly and defending Putin. On his Wednesday night program he delivered a dialogue opposing the sanctions that the U.S. and most of the free world are imposing on Russia. And if that weren’t bad enough, Carlson also made a plaintive plea on behalf of Putin keeping his job as Russia’s top totalitarian tyrant.

Carlson began by asserting that he would withhold judgment on whether the course of action taken by the NATO alliance was a wise course. Which was followed by him unleashing the judgment he just finished saying he would withhold. He sarcastically whined that reflecting on moral implications, or thinking about your own country is a crime, and even treasonous. Then Carlson dived into one of favorite pastimes, asking asinine rhetorical questions:

“What’s the point of all of this? Putin is bad. No one in America is gonna argue with that [except Carlson, Trump and other right-wingers already have]. But will destroying the entire Russian economy make Putin less bad? Will it make Russian troops withdraw from Ukraine? And if it will, how exactly will that work, and how long will it take?

Or is the plan even bigger than that? If they did, we can force Vladimir Putin from office entirely. Okay. Will that work? And if it does work, what happens to Russia after Vladimir Putin leaves? Would the next Russian president be an improvement over Putin?”

Tucker Carlson pushes back on calls for Putin's removal pic.twitter.com/h4iSVYGzk8

So Carlson, with his BA in history and no experience in diplomacy, is against the stiff sanctions that the rest of the world’s most knowledgeable foreign policy experts think are necessary and effective. That’s so considerate of him to be worried about his Russian oligarch pals, rather than the people of Ukraine who are being slaughtered and forced to leave their homeland as refugees.

Even worse, Carlson is arguing that Putin should be allowed to remain in power because his successor could be worse. Do you suppose that Carlson would have used the same argument for keeping Hitler in power? Apparently he believes that all of the world’s monstrous leaders should be left to commit whatever crimes against humanity they like.

Obviously that doctrine is pure idiocy. If there is a genocidal madman running a nation and attacking other nations, he needs to be constrained and, if necessary, removed from power. You worry about his successor, who under the circumstance is likely to be more moderate or suffer the same fate, after you excise the immediate problem. Unless, that is, you are Tucker Carlson and you have a fuehrer fetish. Which is, by the way, what draws him to Trump.