Spotting lies and hypocrisy on Fox News has never been an especially difficult task. It’s actually been a regular feature of their programming from its earliest days. And nowhere is that more apparent than on the primetime airing of the “Human Manure Spreader,” Tucker Carlson. In fact, it happens with such frequency that the network argued in court (successfully) that no reasonable person would take Carlson seriously. 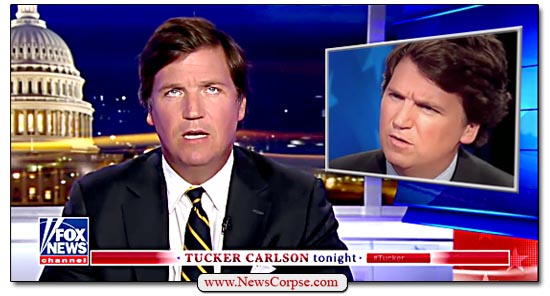 The only problem with the “reasonable person” standard is that there are so many unreasonable persons watching – and appearing on – Fox News. And this was evident on Monday night’s episode when Carlson advanced his abhorrent asininity in a twenty minute tirade that sought to erase the record of his treasonous support for Russia over Ukraine, the United States, and our international allies.

Just last week Carlson delivered a drooling televised love letter to Putin with all of the reasons he admired the brutal dictator, and why nobody should hate him. It’s a doctrine that mirrors identically that of Putin lover Donald Trump, who Carlson is also hopelessly infatuated with.

Carlson began his harangue (video below) ranting that…

“On Twitter, you see Democrats pretending that their political opponents are responsible for the invasion and somehow support it. […] In this country, virtually everyone understands that the invasion of Ukraine is bad. It’s bad for us and for the world. And Vladimir Putin is bad too. So, effectively in America, those are settled facts. We can stop debating them.”

That is a 180 degree turnaround from everything that Carlson has been babbling about for the past week. And for him to say now that “Putin is bad” suggests a measure of hypocrisy that obliterates the scale. He has literally declared that he is backing Russia in this war:

Carlson went on to complain about Democrats justifiably criticizing Republicans who support Russia and/or Putin, saying “Isn’t war the moment for unity?” That was in the very same harangue wherein he lambasted Democrats and blamed Biden for Russia invading Ukraine. So much for unity.

Mr. Swalwell had his own succinct reply to Carlson questioning why he would say such a thing…

Why am I saying it, Tucker?

You, Trump & Pompeo cheered Russia on until Americans rallied behind Ukraine. We reject you and your #PutinBloc. https://t.co/7dVJlMG18o

Carlson’s histrionics continued with nonsense like his claim that Democrats “were telling us that sanctions and arming the Ukrainian military would prevent a Russian invasion.” Wrong. They were hoping that such measures would prevent an invasion, but were prepared to go farther if they didn’t.

Carlson also claimed that “No one defended the riot on January 6th. We certainly didn’t.” Of course, that is blatantly untrue. Many Republicans, including (especially) Trump, defended the insurrection and praised the rioters as patriots. And Carlson himself produced a crocumentary asserting that the the whole thing was a “false flag” operation staged by the FBI, and that the rioters were victims.

So now that the country – and the world – is expressing their disgust with Russia’s unprovoked attack on Ukraine, Carlson is trying to sanitize his solidarity with the monstrous Putin regime. This might work with the dimwits who willfully believe his lies, but the majority of the American people have memories that go back farther than a week.

And then there’s this…