Never let it be said that Donald Trump doesn’t know where his priorities lie. While the rest of the civilized world is consumed by the heinous war crimes being committed by Trump’s BFF Vladimir Putin against the innocent people of Ukraine, Trump is busting his prodigious gut over the dire prospects for his favorite disinformation and Russian propaganda disseminator, One America News Network (OAN). 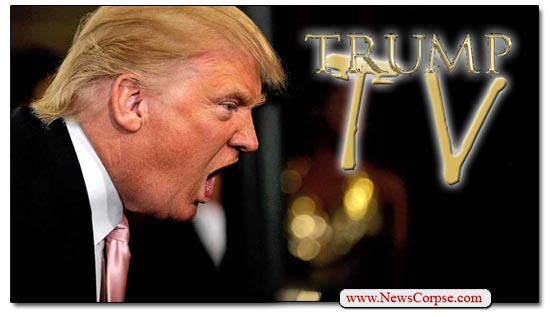 In a tweet posted by his Twitter ban defying spokes-shill, Trump unleashed a totally delusional diatribe against cable companies that he said were “terminating a very popular and wonderful news network (OAN).” His extended, run-on rant whined that…

“Time Warner, the owner of Fake News CNN, has just announced that they will be terminating a very popular and wonderful news network (OAN). Between heavily indebted Time Warner, and Radical Left Comcast, which runs Xfinity, there is a virtual monopoly on news, thereby making what you hear from the LameStream Media largely FAKE, hence the name FAKE NEWS! I believe the people of this Country should protest the decision to eliminate OAN, a very important voice. Likewise, Comcast is terrible and expensive. Let them know that you’re sick and tired of FAKE NEWS! In this modern age of technology, they are no longer necessary. Demand that OAN be allowed to stay on the air. It is far bigger and more popular than anyone knows, and importantly, it represents the voice of a very large group of people!”

Holy Shih Tzu! There is a lot of crazy to unwrap there. Let’s begin with the fact that there is no such thing as “Time Warner.” It ceased to exist in 2016 when it was acquired by Charter Communications and folded into Spectrum. Furthermore, the former cable company Time Warner (now Spectrum) was not the owner of CNN. That’s WarnerMedia, which was just acquired by Discovery Networks. So Trump is, as usual, pitifully ignorant of the business he is raging against.

Trump goes on to claim that OAN is “a very popular and wonderful news network [and] is far bigger and more popular than anyone knows.” Really? If no one knows how popular it is, than it is, by definition, unpopular. OAN’s audience is actually so small that it isn’t even tracked by Nielsen.

Moving on, how can Trump say that there is a “virtual monopoly on news” when Fox News is the highest rated cable news network? And what about right-wing outlets like Newsmax, Sinclair, and News Nation? Trump’s tedious wailing about “fake” news is just his description of any news with which he disagrees. If the fake label belongs anywhere, it is with OAN and Fox, where facts have been discarded in favor of propaganda.

What’s more, you have to wonder why Trump is so outraged over the loss of OAN as a part of the “LameStream Media” when he says in the same statement that “they are no longer necessary.” If that’s true, then why should anyone bother to take Trump’s advice to protest the decision and “demand that OAN be allowed to stay on the air”? Someone should tell Trump that OAN is already “allowed” to be on the air. They just need to offer a product that justifies its carriage financially. Under free market capitalism, which Republicans used to pretend to advocate, cable companies are also allowed to make business decisions as to which channels they carry.

Finally, this entire episode of Trump’s Daily Tantrum was totally contrived in his diseased brain. OAN has not been carried on Charter (Spectrum) or Comcast for years. It’s puzzling what triggered this outburst because there isn’t any news on this subject except for a report that OAN has filed a wholly meritless lawsuit to contest DirecTV’s decision not to renew their contract.

Perhaps OAN hopes to recoup some what they expect lose in the lawsuits pending against them. OAN is currently being sued by Dominion Voting Systems and Smartmatic software for propagating Trump’s lies about election fraud. Separately, they are being sued by two former Georgia election workers who are victims of Trump’s election deceptions that were prominently pushed by OAN.

Trump, meanwhile, is behaving in his typically deranged and utterly hypocritical manner. The rabid “cancel culture” critic has been bellowing for boycotts of DirecTV and other media companies that aren’t sufficiently worshipful. He’s been similarly barking at social media platforms, many of which have banned him for concocting and spreading dangerous lies. Perhaps he thinks people will just switch to his own Twitter rip off. But given the disastrous launch of Trump’s hysterically named TRUTH Social, that isn’t likely to happen either. SAD!