What could be more predictable than Donald Trump attempting to divert attention away from whatever new self-created calamity is causing him grief? Just as news has broken about his legal tribulations, and the investigation into his role in the January 6th insurrection gets closer to issuing criminal referrals, Trump announces another of his spectacularly asinine media stunts. 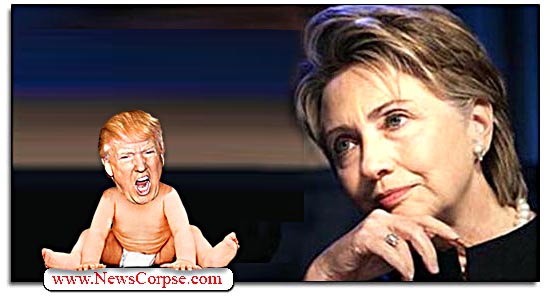 On Thursday Trump’s legal team revealed that they have filed a lawsuit against Hillary Clinton, and nearly fifty other people who the suit describes as “her cohorts,” in a conspiracy aimed at “destroying his life.” The list of defendants is itself a comedic exercise in extremist overreaching and includes Clinton, along with numerous Democratic operatives and FBI officials. It’s 108 pages of pure paranoid bullpucky that any reputable lawyer – or fiction author – would be embarrassed to be associated with.

The filing contained the obligatory inanities and misspellings that are commonly littered throughout any Trump legal document. But most prominent in this chronicle of conspiracy crackpottery are the innumerable lies and disinformation. It began with a flourish of fallacious fabrications soaked in utterly implausible melodrama:

In the run-up to the 2016 presidential election, Hillary Clinton and her cohorts orchestrated an unthinkable plot – one that shocks the conscience and is an affront to this nation’s democracy. Acting in concert, the Defendants maliciously conspired to weave a false narrative that their Republican opponent, Donald J Trump, was colluding with a hostile foreign sovereignty. The actions taken in furtherance of their scheme—falsifying evidence, deceiving law enforcement, and exploiting access to highly-sensitive data sources – are so outrageous, subversive and incendiary that even the events of Watergate pale in comparison. […]

“Defendants, blinded by political ambition, orchestrated a malicious conspiracy to disseminate patently false and injurious information about Donald J. Trump and his campaign, all in the hopes of destroying his life, his political career and rigging the 2016 Presidential Election in favor of Hillary Clinton.”

From there the filing went on to throw in every deceitful and baseless allegation Trump has peddled for more than six years. For instance…

“Special Counsel Mueller went on to exonerate Donald J. Trump and his campaign with his finding that there was no evidence of collusion with Russia.”
To the contrary, Robert Mueller explicitly stated that Trump was not exonerated and he enumerated at least ten instances of obstruction of justice.

“The full extent of the Defendants’ wrongdoing has been steadily and gradually exposed by Special Counsel John Durham.”
Actually, Durham never alleged the wrongdoing that Trump implies. To date he has only addressed some tracking of publicly available Internet activity. What’s more, Durham’s reporting clearly states that the period of time that such Internet activity was being monitored was during President Obama’s term, not Trump’s.

In the 108 pages of this filing Trump referenced “Russia” 159 times. His obsession with absolving himself of any alleged “collusion” is obvious. But it is also ludicrous. A bipartisan report from the GOP-led Senate Intelligence Committee found that…

“The Trump campaign’s interactions with Russian intelligence services during the 2016 presidential election posed a “grave” counterintelligence threat […] it detailed how associates of Donald Trump had regular contact with Russians and expected to benefit from the Kremlin’s help.”

Trump’s lawsuit also makes false claims that the defendants were “hacking servers at Trump Tower, Trump’s private apartment, and, most alarmingly, the White House.” However, there is no evidence of that in the filing or reality. Although we do know that Trump asked Russia to hack Clinton’s emails, because he made that request on national television. Trump also mentioned Wikileaks in the lawsuit. Which is curious considering that the data Wikileaks made available to the Trump campaign was confirmed to have been provided by Russian hackers.

Any credible person analyzing this lawsuit cannot help but come away with the impression that it is nothing more than a deliberate distraction based on demonstrable lies. If it were made into a soap opera, it would be laughably unwatchable. The writers would be suing to have their names removed from the credits.

This lawsuit reeks of the sort of ineptitude that is the hallmark of Trump’s legal team. But if it proceeds, which is doubtful, it will offer some of the best entertainment deriving from the discovery process and Trump’s depositions. So here’s hoping that Trump is stupid enough to go forward with it.

UPDATE 9/9/2022: Trump’s ludicrous lawsuit got laughed out of court…

“Trump ‘is not attempting to seek redress for any legal harm,’ [Judge] Middlebrooks said. ‘He is seeking to flaunt a two-hundred-page political manifesto outlining his grievances against those that have opposed him, and this Court is not the appropriate forum.'”