For most his tenure at Fox News, Tucker Carlson has proven himself to be an immanent threat to the health and well being of the American people. His seething white nationalism, his support for domestic terrorists, and his relentless promulgation of lies and propaganda have set him apart from even his conspiracy theory confederates at Fox News. 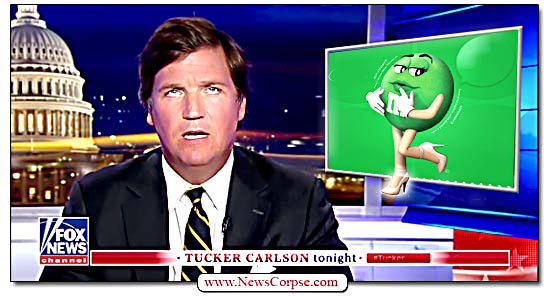 Carlson’s flagrant distortions of reality are frequently dangerous in direct ways. He has been a staunch opponent of COVID vaccines, likely resulting in severe illness and death for many of his dimwitted viewers who were foolish enough to follow his ignorant advice. And he has embraced Russian dictator Vladimir Putin’s brand of totalitarianism.

On Wednesday night Carlson found a brand new way to make Americans sicker. He literally came out in favor of smoking cigarettes and/or vaping, a popular and lethal pastime for teenagers. Carlson’s rant was triggered by the news that the Food and Drug Administration (FDA) is cracking down on nicotine delivery products like those marketed (to children) by Juul. Carlson, of course, has a knee-jerk opposition to anything done by the Biden administration, no matter how unarguably beneficial. So Carlson unleashed the following idiotic harangue…

“Yesterday the FDA announced it’s planning to remove virtually all nicotine from cigarettes. Now nicotine is not the thing that gives you cancer. Nicotine is the thing – it’s addictive, but it also increases mental acuity. But they’ve taken that out. According to the Wall Street Journal, the agency will also ban Juul e-cigarettes. Now what happens when you get off nicotine? Well, your testosterone levels plummet, and you gain weight. Both of which the administration is for because you become more passive and easier to control.”

According to Tucker, Biden's FDA is banning Juul to ruin your testosterone levels and make you "more passive and easier to control." pic.twitter.com/W0Byyey3mQ

Where to start? How about with the fact that nicotine is not merely addictive, its addictive properties are artificially enhanced in cigarettes by tobacco companies to make their victims (aka customers) more physically dependent on them. Secondly, to the extent that nicotine affects mental acuity, it acts as a stimulant that has essentially the same temporary affect as cocaine or methamphetamines. Is Carlson in favor of those as well?

Carlson then asserts that when nicotine is stopped it results in a decline in testosterone. That’s false. In fact, some studies show that nicotine can actually “depress testosterone levels“ and are “another main cause of erectile dysfunction.” Furthermore, “smokers, compared to nonsmokers, had greater amounts of age-related brain volume loss.” Which would explain Sean Hannity…

WATCH: Sean Hannity threatens to vape live on Fox News if Biden bans Juul — “I’ll do it live on TV and they can come and arrest me” pic.twitter.com/LcFwKOHCO5

Carlson also makes the preposterous allegation that the Biden administration wants people to be obese and to have lower levels of testosterone, because that would make them “more passive and easier to control.” WHAT?

Who wants to tell Carlson that nine of the top ten most obese states in the U.S. are in the blood red South? Does that mean that Republicans have manipulated America’s fattest populations in order to control them? Not surprisingly, the most populous – and bluest – states in the country (New York, California, Massachusetts) are among the ten least obese.

Carlson has been on a testosterone binge lately. He recently aired a segment on how distraught he is that the cartoon M&Ms were no longer “sexy” to him. He also produced a crocumentary that he called “The End of Men.,” which he described saying that “One of the biggest stories in our lifetimes is the total collapse of testosterone levels in American men,” and that it was “changing the way people are at the most fundamental level.”

RELATED: Macho Poser Tucker Carlson’s Journey from ‘Dancing With the Stars’ to ‘The End of Men’

True to form, almost everything in his film was blatantly false. Carlson’s fixation on testosterone is just the latest example of his hatred for women and his innate fear of inadequacy. And he is deftly injecting it into his sweaty obsession with lambasting all things Biden. The result being an advocacy of a deadly and addictive narcotic that is causing untold suffering among American adults and children. And this is something that Fox News, and its executive management, thinks is acceptable television?

4 thoughts on “Tucker Carlson Boldly Endorses Nicotine Addiction, Because Without It You’re Fat and Passive”