Glenn Beck spent a good chunk of his morning radio program today lambasting the Occupy Wall Street movement. It’s a pastime that he has become obsessed with, and his obsession grows every day as OWS gets stronger and garners more support from the American people. Today’s tirade centered on the news that former KKK Grand Wizard David Duke said something nice about OWS.

Duke: “I cheer the men and women on the streets condemning international banks that hold America hostage. […] Finally Americans are rising up and it feels great.”

Duke’s remarks were focused on the movement’s opposition to giant, multinational banks and the power that they wield. While the protesters are concerned that a small minority of wealthy individuals and corporations have an inordinate amount of influence over our society and government, in Duke’s acutely bigoted brain that means Jewish domination of world finance. The two parties could not be further apart. OWS wants fairness for all and democratic rule. Duke wants all Jews stripped of their status and deported – or worse.

Beck made much of Duke’s commentary and concluded that the unsolicited and unwelcome “endorsement” proved that the Occupiers were anti-Semites aligned with Duke’s repulsive agenda. What then would Beck have to say about Duke’s endorsement of the Tea Party?

Duke: “The Tea Party movement is a great sign that the people are finally waking up.”

Obviously Duke seeks to latch onto any convenient movement in order to promote himself. Self-promotion is an endeavor with which Beck should be well acquainted and it’s something he has in common with Duke.

Furthermore, if anyone has a commonality of purpose with Duke, it’s Beck. They both hate New York and all it represents. Last February Beck said that Reform Jews are “almost like…radicalized Islam.” In January he produced a program in which he listed the nine people whom he said most contributed to the 20th century being the Era of the Big Lie. Eight of them just happened to be Jewish. His attacks on George Soros as a tyrannical “Puppet Master,” (another common derogatory insult aimed at Jews), are infamous. And Beck has even perpetuated the intentionally incendiary allegation that Jews killed Jesus. He has been denounced by the Anti-Defamation League for his “bigoted ignorance.” And who can forget his complaint that President Obama “has a deep-seated hatred for white people.”

The fact that Beck didn’t know about Duke’s easily discoverable affinity for the Tea Party is typical of his lazy, fact-free practice of character assassination. But what’s worse is that the Duke video that Beck posted on his own web site, TheBlaze, featured this picture of a Tea Partier while Duke was praising those who protested Wall Street: 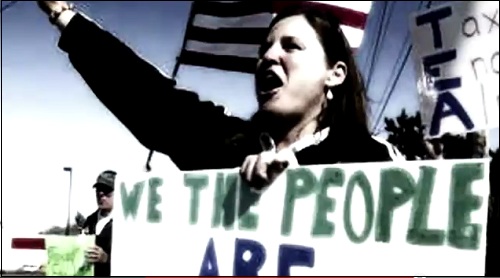 Did Beck even bother to watch the video he posted? Or is he just so fixated on slandering his enemies that he doesn’t care that he looks like an idiot? He certainly doesn’t have much respect for the intelligence of his audience, but at least so far as that’s concerned, he has good reason.