Rudy Giuliani, the leader of the 9/11 Generation, and John McCain, the Beast of Baghdad, are starring together in this election year’s most TERROR-ifying fright fest. Nightmare On Pennsylvania Avenue is certain to scare the daylights out of everybody who sees it – especially Democrats who are already shuddering at the thought. 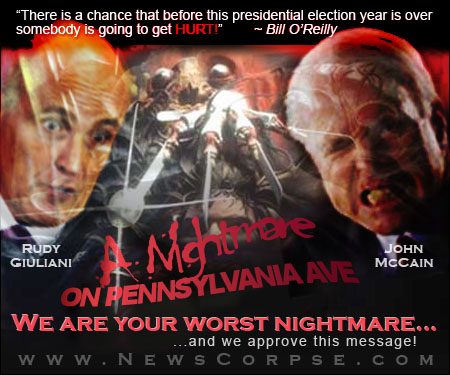 Don’t miss the extravaganza that has Bill O’Reilly saying:

“There is a chance that before this presidential election year is over somebody is going to get hurt.” ~ Bill O’Reilly

Here is John McCain’s new ad boasting that he is the Democrat’s worst enemy:

Here is Rudy Giuliani’s earlier ad boasting that he is the Democrat’s worst enemy:

Their heroes are looking more pathetic with every passing day. Huckabee props up Chuck Norris, a 68 year old high kicker who is supposed to make us vote for Rev. Mike or he’ll beat us up behind the cafeteria during recess. McCain has his own 62 year old relic who will challenge Huckabee’s champion ala Gamera vs. Mothra at the Monster Leisure World in Boca. What’s next? Illegal Alien Vs. Terrorist Predator?

Not much we can do but sit back and watch as they threaten to destroy us or each other or whoever is their enemy of the moment. It’s not art, but with a bucket of popcorn and a large soda it might just be some fun.