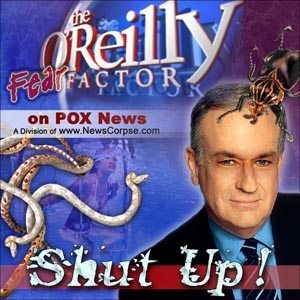 Bill O’Reilly is broadcasting his “O’Reilly Fester” from Los Angeles all this week. We don’t particularly want him, but hey, it’s a free country – despite O’Reilly’s best efforts to promote authoritarian rule via his bullying brand of demagoguery.

The question I have is, “Why is he here?” Seeing as Billo is unlikely to return my calls, and I don’t have a producer like Stuttering Jesse Watters to ambush him at his hotel, I’m left with speculation.

One possibility is that the Academy Awards are being broadcast this Sunday. O’Reilly, well known narcissistic attention whore that he is, may want to rub shoulders with the celebrities he is so fond of bashing. It would not be the first time he has attempted to skim off some glory from those he routinely disparages. Two years ago, at the height of the Dixie Chicks controversy, he tried to shmooze Natalie Maines at a Time, Inc. party. She smacked that down in short order, but the same parasitic tendencies may have brought O’Reilly to Hollywood this week.

Newshounds theorizes that O’Reilly may have come to attend the winter retreat of the Republican National Committee at the Beverly Wilshire Hotel. This $15,000 (minimum) per head affair featured appearances by Party big wigs including Karl Rove.

It should also be noted that we are in the middle of Nielsen’s February sweeps, one of the most important ratings periods of the year. O’Reilly may be hoping to goose his program’s performance by glitzing it up with Tinseltown glamour. Of course, the Oscars and the RepubliFest could both contribute on this measure.

But if the foregoing isn’t enough to hype the Nein-Spinster, it appears he is planning another event that can only be described as deliberately provocative and profoundly insensitive. O’Reilly is scheduled to appear at the Brentwood Theater on the grounds of the West LA Veteran’s Administration. That’s right – the Veteran’s Administration. The federal agency responsible for, amongst other things, programs to assist veterans who are homeless due to finances, emotional or physical disability, substance abuse, or other hardships. The agency that reports that there are a couple hundred thousand such veterans who are homeless. Now O’Reilly actually has the gall to show up at a facility whose purpose is to aid people who O’Reilly is on record as saying do not exist.

If anyone is in the Brentwood vicinity tomorrow, you might want to visit the VA and give Mr. O’Reilly the welcome he deserves. I wish there were more time to organize a proper reception, but a spontaneous turnout of some patriotic Americans (and hopefully some vets) to let O’Reilly know how we feel would be great. Here is the information: