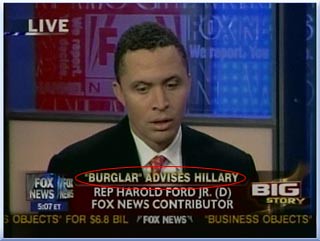 When former Tennessee congressman Harold Ford, Jr. signed on as a Fox News contributor last year, he made himself available to be exploited as a Fox News Democrat. That meant his remarks would be employed to disparage other Democrats and put a bipartisan mask on Fox’s rightist propaganda.

Well, apparently the honeymoon is over. Today Ford appeared on MSNBC’s Race For the White House, David Gregory’s new show. Ford is still a conservative from the Democratic Leadership Council wing of the party, but his views will be taken more seriously as an MSNBC commentator than as a hit man for Fox. Time will tell if he can regain some semblance of a reputation.