Conservative myth-makers have long held that the immigration reform measures advocated by Democrats were back-door paths to amnesty. That has never been true in the past, and it is not true for the most recent proposals put forth by the Obama administration and a bipartisan committee of senators. Nevertheless, the Fox Nationalists are engaging in their trademark brand of hysterical panic-mongering to incite fear among their gullible readers. 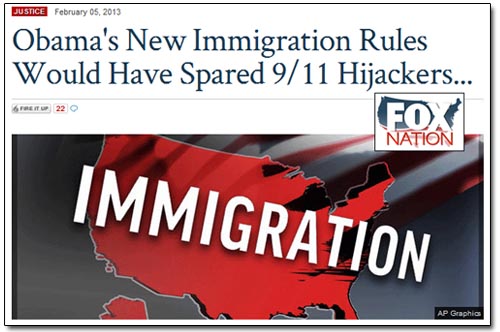 The claim featured here that “Obama’s New Immigration Rules Would Have Spared 9/11 Hijackers” is re-posted from the “Moonie” Washington Times. The implications of this assertion would be troubling but for the fact that it is completely false. There is nothing in Obama’s proposal that would have had any affect on the immigration status of the 9/11 plotters for one simple reason: None of them had entered the United States illegally.

That’s right. Every single one of the nineteen 9/11 terrorists came to America on legal visas. The only point at which any of them might have been affected would be via an enhanced tracking procedure to identify visitors who overstay their visa, which only applied to perhaps three of them. So since the proposed immigration rules were never designed to address legal immigration, it is absurd to assert that they would have “spared” anybody. By the same logic you could say that laws against littering or jaywalking “spared” the terrorists, because nothing in those laws would have prevented the hijackings either.

The Fox Nationalists are making an argument that is as nonsensical as accusing Ronald Reagan of aiding Al Qaeda because he once fired a bunch of air traffic controllers. It appears that Fox is graduating from merely lying about everything to inventing surreal theories that seem to be hallucinogenically inspired.

2 thoughts on “Fox Nation vs. Reality: Amnesty For 9/11 Hijackers?”