For almost a week now Fox News and their rightist comrades have been giddily singing the praises of Bob Woodward, someone they ordinarily denounce as a minion of Satan. The reason for this new found worship is that Woodward has taken to satisfying Fox’s never-ending craving for sound bites that portray President Obama as a thug.

Woodward has made a very public showing of what he has characterized as a threat. He asserted that a “very senior person” in the administration delivered an ominous warning that “You will regret doing this.” He went on to say “It makes me very uncomfortable to have the White House telling reporters, you’re going to regret doing something.”

The White House disputed the inference Woodward was making and he was eventually compelled to release the emails that he said were the source of the alleged threat. As so often occurs, Woodward was obviously being hyper-sensitive and his comments about the exchange bear little resemblance to reality. No wonder Fox News pounced on it. Misrepresentation of reality is their forte. Here is what the actual email from White House Economic Council Director Gene Sperling said:

“I do truly believe you should rethink your comment about saying saying that Potus asking for revenues is moving the goal post. I know you may not believe this, but as a friend, I think you will regret staking out that claim. The idea that the sequester was to force both sides to go back to try at a big or grand barain with a mix of entitlements and revenues (even if there were serious disagreements on composition) was part of the DNA of the thing from the start.”

It is absolutely disingenuous and untrue to cast these remarks as a threat. Sperling was speaking “as a friend” and offering advice that Woodward’s position would prove to be wrong and it is that error that he would eventually regret, not any imagined reprisal from the President. And to underscore how tame the exchange was even from Woodward’s perspective, he responded to Sperling’s email saying…

“Gene: You do not ever have to apologize to me. You get wound up because you are making your points and you believe them. This is all part of a serious discussion. I for one welcome a little heat; there should more given the importance. I also welcome your personal advice.”

Does that sound like someone who feels that he was threatened by a powerful and hostile government enforcer? Nevertheless, Woodward went on television and drew a picture of the exchange that is totally at odds with his own account. The only plausible explanation for this deception is that he wanted to gin up a controversy that would thrust him into the limelight and make him look like a courageous journalist suffering at the hands of a vengeful despot. In other words…a pitiful ploy for attention. Which is something he got in abundance from the right-wing media who eat this stuff up.

Fox News has been drooling over this debate for days, and their lie-riddled web site Fox Nation posted an absurd item that excised Woodward’s email response and topped off the piece with a headline bleating “Will the White House Make Bob Woodward ‘Regret’ Reporting Obama’s Sequester ‘Lies’?” 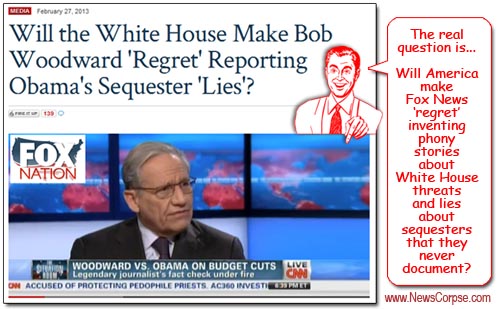 In one short sentence Fox distorted the Woodward/Sperling exchange (no one threatened to “make” anyone do anything), and they inserted an unsupported allegation that Obama had lied about the sequester. All in a day’s obfuscation and deceit for Fox News.

[Update] Media Matters is reporting that a number of right-wing critics are backtracking now that the actual emails have been released and the alleged threat is clearly non-existent. For instance, Matt Lewis (The Daily Caller) says that conservatives were “played” by Woodward. Tucker Carlson appeared on Fox to say the intimidation claim was “hyped.” Erick Erickson (Red State) says he “must now move to the ‘not a threat’ camp.” However, some dead-enders are still pushing the fabricated theme. They include Breitbart’s John Nolte, Matt Drudge, and, of course, Fox News, where Neil Cavuto joined in and then let Manic Mark Levin rant uninterrupted about what a “sleazy,” “nasty,” person Obama is. 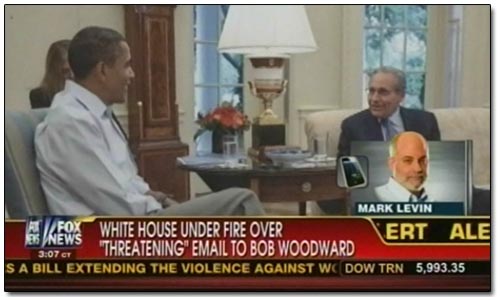