On Tuesday’s edition of The Beat with Ari Melber on MSNBC, Melber hosted what was supposed to be a discussion of racial division in the era of Donald Trump. That’s a timely topic that had the potential to be enlightening and productive. There’s just one problem. Melber made the mistake of inviting right-wing bomb-thrower Candace Owens on to take the conservative side of the debate. 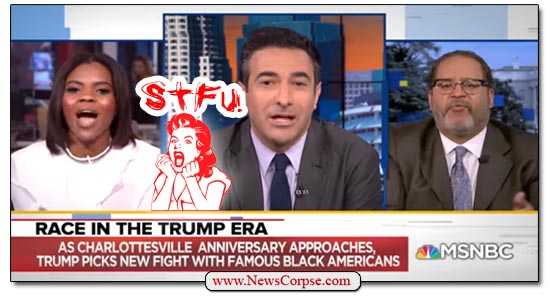 Melber began the segment innocently enough with a summary of what he expected it to cover. He welcomed his guests, Owens and Prof. Michael Eric Dyson, with this introduction (hair-raising video below):

“President Trump again attacking prominent African-American. He’s just impugned the the intelligence of LeBron James and Don Lemon. Which echoes the way he singled out the intelligence of Congresswoman Maxine Waters or the academic credentials of Barack Obama.”

And it was all downhill from there. Melber begins the discussion by asking Owens if she thinks that Donald Trump is embracing racial division. Her answer was a long-winded filibuster that produced nothing but anger and hate and entirely evaded the topic. She began slowly, pretending to be responsive, but shortly diverted to an unrelated subject about the recent rash of gun violence in Chicago (about which she opposes any action on guns). And that rant somehow morphed into her own travails in public where she has been confronted by opponents. And finally she went off on an extended tirade wherein she exalted Trump’s (imaginary) achievements, whined about black conservatives being criticized, and asserted that Democrats have always been racist, ignoring the party realignment that took place in the 1950s and 1960s.

All of that occurred in a wild-eyed display of bluster where Owens refused to stop yammering, ignored Melber’s pleas to be civil and fair, and generally behaved like deranged mental patient who traded her meds for Snickers bars. But what needs to be recognized here is that this was not a spontaneous outburst. Owens came on the show planning to leap off the rails from start. That’s evident in her evasion of the questions which she was told in advance would define her appearance. And it’s evident in her obviously prepared raving and disrespect for civil discourse.

Considering what occurred in this segment, MSNBC, and other conscientious news networks, should realize that booking people like Owens is a futile endeavor. Their only purpose is to derail the conversation and insult the participants. And they should not be given a platform to do that. Not only is it a waste of time, it prevents the discussion of important issues that would be useful to the audience. Owens belongs on Fox News and Infowars where haranguing the left is central to their mission. But real news networks need to learn from this that booking these cretins is just giving them leeway to crap all over free speech.