The Fox News community web site and Fib Factory, Fox Nation, posted an item this morning that sought to discredit President Obama’s qualifications to be president. In the process they not only disqualified several Tea-publican presidential hopefuls, but they demonstrated what a laughably unserious source for news Fox has become. 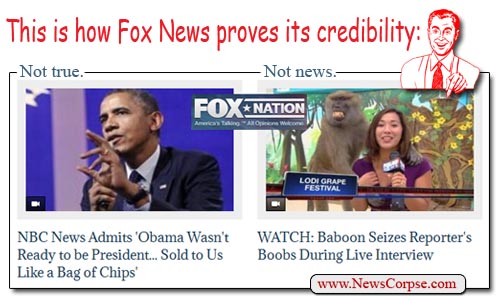 NBC News had nothing to do with the article about Obama’s readiness to be president. They certainly did not “admit” anything of the kind. It was Joe Scarborough of MSNBC, a Republican host and pundit, who made the comment that “Barack Obama has proven over the past five years that he wasn’t ready to be president of the United States.” Of course, that’s a position that GOP pundits have held since before Obama ever took office, and can hardly be considered breaking news.

The funny thing is that Scarborough’s reasoning behind his opinion is that “Obama ‘came out of nowhere’ as a freshman senator […] with less than a full term in the U.S. Senate, also unimpressive. Most of his time there seemed to be spent running for the presidency.” That description fits freshmen senators and prospective presidential candidates Ted Cruz, Rand Paul, and Marco Rubio, as well as it does Obama. Therefore, we can assume that Fox also regards these Tea Party darlings as unfit for duty in the White House.

And just to drive home how fiercely Fox News is competing with supermarket tabloids for the Batboy-loving news consumer, they juxtaposed the article about Obama with one featuring a reporter being groped by a monkey (insert Schwarzenegger joke here). If this doesn’t send a message about Fox’s credibility as a news enterprise, I don’t know what will.

Yesterday on MSNBC’s Morning Joe, Time Magazine editor-at-large and senior political analyst, Mark Halperin sought to make a comparison between Sarah Palin and Howard Dean. Commendably, the show’s co-hosts would have none of it. Mika Brzezinski said flatly that it was “not the same.” Joe Scarborough went even further:

Joe Scarborough: “It is such a disservice to compare Sarah Palin, in any aspect to Howard Dean. Yes, because that is an insult to Howard Dean’s intelligence.”

Fox Nation and other rightist webizens are aghast at Scarborough’s slap at Palin. But do you think they ever bothered to actually compare the two?

The similarities are mind-boggling. Scarborough was quite right to admonish Halperin for his simplistic and incorrect analysis. But the bigger issue here is how someone like Halperin can be accorded the respect and authority of an editor’s role at Time Magazine. Exactly how low are their standards?

A little over two years ago I wrote an article titled, The Cult Of Foxonality™. It’s premise was that…

“Fox viewers appear to be more loyal to Fox than to Republicans or conservatism. This misdirected allegiance bestows a far more influential authority onto a media entity than ought ever to be considered. It suggests that the bombastic demagogues that Fox has shaped into celebrity anchors truly do weigh down their transfixed disciples.”

That piece employed an analysis of ratings and viewer habits at the time that confirmed that Fox News viewers were wedded to their cable hearth and would not be moved. Subsequent events reinforced the theory. For instance, prior to the election, a Rasmussen poll reported that nine out of ten Fox News viewers intended to vote for John McCain. That’s a higher percentage of McCain voters than amongst Republicans. 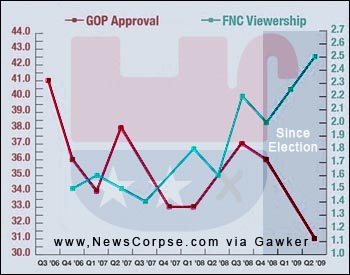 Recently, Fox News has been building on their ratings dominance. In an attempt to understand why Fox would be increasing their audience at a time when Republicans are reaching new lows, I revisited the cult hypothesis. No other model adequately explains the stark divergence of the fates of Fox News and the Republican Party.

Looking at the current cable news landscape, there is an obvious separation of the primary players. Fox News is far and away the leader. MSNBC is the spunky challenger that has recently overtaken the old master, CNN. It would be easy to assign labels that reflect the partisan programming philosophy of these networks. However, in truth, there is only one truly partisan network among them.

Fox News’ success is firmly rooted in its primetime lineup. With Bill O’Reilly, Sean Hannity, and Greta Van Susteren all easily winning their time periods. Add to that Glenn Beck’s arrival that has put him in competition with perennial leader O’Reilly. But it doesn’t stop there.

Fox’s business anchor (and head of their business network) is Neil Cavuto, an aggressively conservative advocate for right-wing viewpoints. Fox’s Washington editor is the blatantly partisan Bill Sammon. The White House correspondent is the equally biased Major Garrett. The Fox morning program is an almost laughable cliche of wingnut dunces.

Compare that to MSNBC’s schedule that consists of only two reliable liberals. Keith Olbermann and Rachel Maddow. [Edit: Add Ed Schultz] Chris Matthews swings both ways and is close buddies with folks like Tom Delay and Rudy Giuliani. Their morning program is three hours hosted by the conservative Republican, former congressman, Joe Scarborough. (Can you imagine Fox News giving three daily hours of airtime to a liberal Democrat?) CNN has become devoid of any personality at all. Their leading figures are null types like Larry King and Anderson Cooper. Although Lou Dobbs does stand out a bit.

So here is the interesting part. Glenn Beck was on CNN just a few months ago with nowhere near the audience he has today on Fox. CNN’s Dobbs, and MSNBC’s Scarborough are as conservative as anyone on Fox, but they can’t duplicate those numbers. What this tells us is that cable news success has little to do with partisanship. If it did, Dobbs and Scarborough would be doing Fox-like business, and Beck would not have had to move to Fox to find an audience. But he did have to move. Because Fox viewers, despite their obvious idolization of him now, were not going to go to CNN to see him. And it wasn’t because they didn’t know who he was. He was already the third biggest star on talk radio.

Therefore, the key to the popularity of Fox is that it is Fox. Their viewers are not interested in programs that feature the same ideology if presented on other networks. CNN could hire Sarah Palin and she would flop. But not on Fox. In fact, I would wager that if Dobbs and/or Scarborough shifted to Fox, everyone would be astonished at their newfound popularity.

Fox is the home of the forlorn, conservative, tea bagging, town howler. They have found their happy place, and they have no intention of moving from it. It is what gives them solace in a time when liberals (or socialists/fascists) have taken over the House, the Senate, and even put a dark-skinned, Muslim, illegal alien in the White House. They need the camaraderie. They need the affirmation. They need the reassurance that the world isn’t crumbling beneath them (or in Beck’s case, that it is). They are even marketing the Fox Nation web site with the undisguised message of a promise of togetherness.

It’s just so sad. I think I’m gonna cry. But that would be Glenn Beck’s shtick.

Chuck Todd is the NBC News Political Director and Chief White House Correspondent. I wonder what qualifications were required for those posts. Listening to Todd’s comments today on Morning Joe suggest that not much actual research or knowledge of current political events were deemed a prerequisite in landing his job:

The key portion of his remarks reveals some sort of tunnel vision on his part as he struggles to explain left-wing criticism of Obama’s healthcare initiatives:

“I think we’ve all been wondering at what point…you know…what would it take for the left to start actually criticizing the White House […] Would there be something that they would get upset about from the White House, and this is the first time we’re seeing that.”

The first time? Apparently Todd doesn’t read Paul Krugman, who has been blasting the President on his economic proposals. Todd hasn’t been watching Keith Olbermann or Rachel Maddow who have been fiercely critical of Obama’s timidity with regard to torture and the prosecution of those responsible for it. Todd must be oblivious to the attacks from advocates of civil liberties and same-sex marriage. And Todd must have missed the free press activists who are hammering the White House for not living up to their promises on transparency.

The left may be many things, but it is not above circling the wagons and firing away at itself. Todd has bought the right-wing fallacy that the media is liberal and that the Obama administration is enjoying special treatment. That has never been true, but that doesn’t stop the rightist propaganda machine from alleging it. One thing they never acknowledge is that Fox News is the #1 national cable news network, and they are notoriously, and viciously, critical of Obama, democrats, and liberals in general.

How the right can assert that the media is liberal while Fox, most newspapers, and virtually all of talk radio, are firmly in the conservative camp, is unfortunate but understandable given their self-serving agenda. What I don’t understand is how professional journalists, who aspire to practice their craft ethically, can be so taken in by the dishonest representations of partisan operatives and, as a result, disseminate the sort of nonsense that Todd is dispensing here.

[Update] Todd responded to an emailer (thanks, ecostar) saying:

“I love getting attacked on things like this. There’s a difference between venting and deciding to act upon the anger and what I was point out was the specific acting out by moveon on rahm and health care. Sounds like some blogger decided to either misrepresent what I said or somehow didn’t understand the context. But thanks for being a ranter in your attack.”

So Todd doesn’t think that all of the advocacy groups connected to the issues addressed above are acting on their complaints? MoveOn is just the latest to act. He should check with the ACLU, the Human Rights Campaign, FreePress.net, Brave New Films/Foundation, etc. His answer is a complete dodge that only further engulfs him in disinformation.