Imagine how frustrating it must be for the folks at Fox News who have been struggling so furiously to tar President Obama with one atrocity or another, but are having no success due to their total lack of evidence. Fox, and their cohorts in the Republican Party, have dedicated themselves to inventing phony crimes, and attempting to pin them on the President, to the exclusion of every other activity. But whether it was “Fast and Furious,” the IRS, Benghazi, gun confiscation, or the global warming hoax, not a single allegation has had any effect on the President or the White House. It has been a total loss for Fox, having expended enormous energy and resources, but getting no return whatsoever. On the air, in print, online, including their Lie Factory Fox Nation – a total bust.

The visceral pain and disappointment of Fox has visibly manifested itself on the air with increasingly ludicrous rhetoric and even more far-fetched charges. But what can Fox do when all of their best efforts to smear Obama have fallen short of their goal? Well, they can dredge up some past bit of melodrama and present it as if it is breaking news: 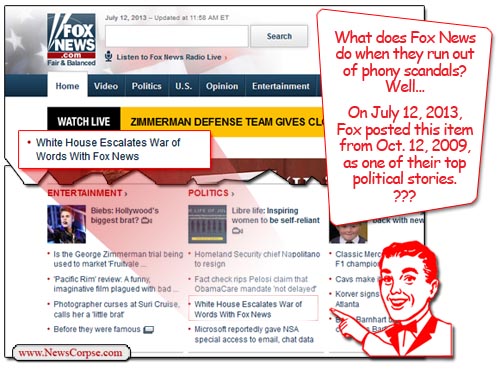 The zombie story that Fox is reincarnating here is one from October of 2009, after Anita Dunn, then the White House Communications Director, correctly noted that…

This is not a follow-up story. There is nothing new added. It isn’t even a new posting. It is a link to an old, irrelevant article that is as out of place as a pet rock.

Why would Fox post this four year old item in their list of current news stories? Besides being ancient, it is unrelated to anything else that is going on in on today’s news cycle. It seems to be merely a wild swing at the President and an awkward reminder of Fox’s paranoia and persecution complex. But overall, it’s simply another example of the way Fox does business. They have no ethical rudder and are running a self-serving, partisan public relations agency for right-wing propaganda. Up next on Fox: Obama “palling around with terrorists.”

[Update 7/14/2003] Two days later, the breaking political stories on Fox News have changed several times with one exception: the zombie “War of Words” story remains in firmly planted on their home page.

6 thoughts on “Zombie Journalism: Fox News Must Be Running Out Of Fake Scandals”