Just when you think that Texas has gone so far over the edge of decency and sanity, they surprise you by pulling a stunt like this: 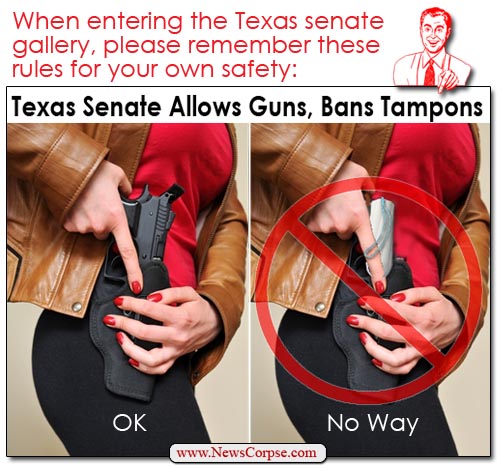 You’re Allowed To Carry A Gun Into The Texas Senate Gallery, But Not A Tampon
According to Jessica Luther, a freelance writer and pro-choice activist who has been coordinating much of the push-back to the proposed abortion restrictions over the past few weeks, Senate officials are confiscating any objects they believe may cause a similar disruption in the gallery during Friday’s vote. Protesters aren’t allowed to carry water bottles or even feminine hygiene products, just in case they might throw them at lawmakers.

However this presents a delicate problem for security personal who must ascertain whether any protester is trying to transport a contraband tampon into the building in some secret hiding place. It also gives new and disturbing meaning to the lyrics of this iconic anthem of the great state of Texas.