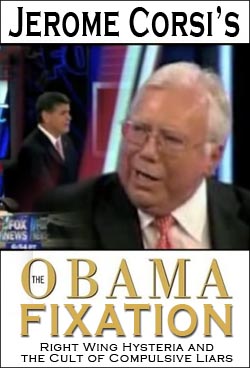 There have not been too many authors more discredited than Jerome Corsi. His previous writings include the infamous “Unfit For Command” that made Swiftboating a verb to describe unscrupulous dishonesty. Corsi deserves that honor as he has also written books on debunked conspiracy theories that Bush is planning to merge the United States with Mexico and Canada (dismissed as nonsense even by conservatives like Michael Medved and John Hawkins of Human Events), and his notion that the supply of the world’s oil will never run out.

His latest smear project is “Obama Nation,” a book that he admits was written “to defeat Obama. I don’t want Obama to be in office,” Corsi told the New York Times. Nevertheless his publisher, right-wing harpy Mary Matalin’s Threshold Books, asserts that his book is not political but is a work of “Scholarship.” Uh huh…Then why was it so easy for Media Matters to uncover a plethora of inaccuracies, misstatements, and lies?

Now the book has risen to the top of the Times’ best sellers list, but even that achievement is not without controversy. The Times notes that:

“The book is being pushed along by a large volume of bulk sales, intense voter interest in Mr. Obama and a broad marketing campaign that has already included 100 author interviews with talk radio hosts across the country, like Sean Hannity and G. Gordon Liddy, Mr. Corsi said on Tuesday.”

It is a common tactic amongst rightist authors and publishers to recruit conservative think tanks, and other sympathetic groups, to buy large quantities of their books in order to boost their sales statistics. The books are then either given away – or thrown away – it hardly matters because the goal was just to generate publicity by reporting big numbers.

Barack Obama, however, does not seem to be anxious to get Swiftboated the way John Kerry was. He has already responded to Corsi’s lie-ography (PDF) with a 41 page fact checking. The meticulously researched document cites more than 50 lies in Corsi’s book. Plus, it quotes numerous independent reviews that also fail to find any merit in the book, and it cites examples of Corsi’s racism and frequently offensive mode of communication.

Despite the manipulative methods that Corsi has employed to get attention, Obama’s people are correct to attack it head on. These sorts of smears must never be left alone in the public mind. They must be struck down with the truth and without hesitation.

Update: Sunday, 8/17/18, Fox News correspondent Liz Trotta (who once joked about assassinating Obama), appeared this morning to defend Corsi. She claimed that his book may have contained some errors early on, but as it progressed it was more accurate. She was, in effect, asserting that Corsi was the one being Swiftboated and claimed that his prior book on John Kerry was mostly true. She, and Fox, simply have no shame.