President Obama traveled to Texas this week to inform the citizens there that ObamaCare has benefits that specifically address their needs. Texas has the notorious distinction of being the state that has more uninsured residents than any other state in the country. A big chunk of that problem would be solved if Gov. Rick Perry and the state legislature would simply agree to expand their medicaid program to cover low income residents. It wouldn’t cost the state a single penny because it is paid for by the federal government.

Nevertheless, Perry has ruled out this expansion despite the fact that a million of his constituents will suffer needlessly due to his cynical politicization of health care. This will hurt real people who require medical attention who will not receive it, as well as people who manage to get care that they cannot afford, which will lead to financial hardships including home foreclosures and bankruptcies. Obama made reference to this dire situation in his address to the people of Dallas.

Obama: I think that all of you understand that there’s no state that actually needs this more than Texas. […] Across this state, you’ve got a million people — because this is a big state — a million people, citizens, who don’t have health insurance that could get health insurance right away if the state of Texas decided to take advantage of [Medicaid expansion].

The response from Texas senator Ted Cruz to this common sense proposal was typically arrogant and insensitive. It exposed a deeply held animus for the President and disrespect for the office.

Cruz: President Obama should take his broken promises tour elsewhere so Texans can continue focusing on the solutions that have allowed our state to become and remain the nation’s economic and job creation powerhouse. 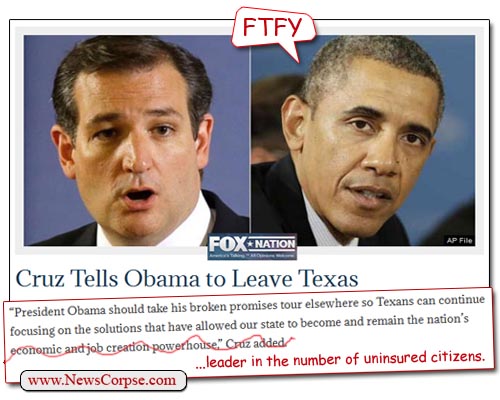 Correcting Fox Nation. More corrections can be found in the
ebook, Fox Nation vs. Reality

Where Cruz gets the idea that he has some authority to direct the President’s itinerary is unknown. However, what is even worse is his obliviousness to the tribulations of his fellow Texans. By focusing on the status of the state’s economy, Cruz drives home the point that the business class of Texas has prospered at the expense of working families. If Texas is such an economic success and job haven, then why are more of it’s residents struggling to get by without health insurance than any other state?

That’s a question that Cruz and Perry and the rest of the GOP Scrooges still refuse to answer. They have a no-cost solution available to them that would relieve the stress of millions, but they won’t accept it because of their overriding desire to sabotage the Obama presidency. Eventually they will have to explain that to voters.