There is joy in Teaville today as perhaps the most admired figure in the ultra-rightist wing of the GOP has answered their hopes and taken concrete steps to embark on a political career. 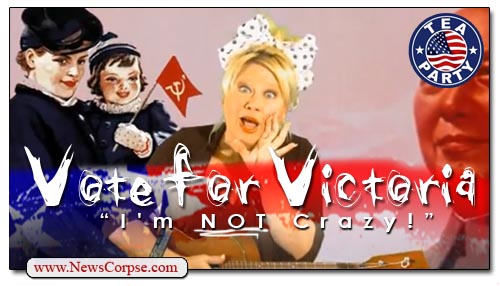 That’s right, former Saturday Night Live ukelele strummer, Victoria Jackson, has declared her candidacy for a seat as a county commissioner in Williamson County, Tennessee. As a commissioner Jackson can be expected to bring her unique “knowledge” of economics, urban planning, law enforcement, business development, and government administration to Williamson’s county hall. Plus, she can recite poetry while standing on her head.

Jackson is revered for her policy positions that include support for a White History Month and opposition to gay marriage. She is a staunch opponent of Islam which she characterized in song as being pro-beheading and pedophilia. She promises that her campaign will focus on issues important to Williamson County’s citizens, like resisting the Muslim Brotherhood, battling the U.N.’s Agenda 21 conspiracy, and obstructing Common Core standards for education.

Have you read Fox Nation vs. Reality?
Check it out at Amazon today.

Once in office Jackson can be expected to be a small government, fiscally conservative advocate for the Constitution and the Christian values that she would unconstitutionally impose on her neighbors. And when the county meetings got to be a little dull, she could whip out her uke and do a chorus of “There’s A Communist Living in the White House!”

If you live in Williamson County, be sure to give Victoria your support and your vote. She told local reporters that she is running a campaign that will rely on word of mouth rather than conventional fundraising, so it may be difficult to donate. But we at News Corpse are wishing her the best and hope that she prevails. Good luck Victoria.