The Congressional Budget Office just released their latest set of economic projections for the next decade and the data provides some good news for America’s workers. But never let it be said that Fox News would receive such information and honestly present it to their woefully deceived audience. The headline at the top of the Fox Nation website trumpeted that the CBO’s report was “Devastating News for ObamaCare: Over 2 Million Workers Will Lose Jobs.” 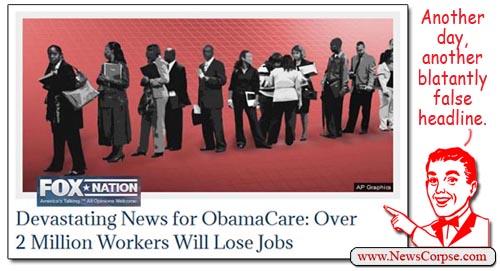 Oh my. That would be devastating – If it were true. However, the CBO report never said any such thing. The truth is that ObamaCare will provide workers with more freedom of choice due to the fact that they will no longer be shackled to jobs they don’t want or need simply because they can’t afford to lose their medical benefits. What ObamaCare does is to make health care affordable so that people can decide whether to continue their employment based on factors other than their health plan. Here is how the CBO phrased it:

“The estimated reduction stems almost entirely from a net decline in the amount of labor that workers choose to supply, rather than from a net drop in businesses’ demand for labor, so it will appear almost entirely as a reduction in labor force participation and in hours worked relative to what would have occurred otherwise rather than as an increase in unemployment (that is, more workers seeking but not finding jobs) or underemployment (such as part-time workers who would prefer to work more hours per week).”

What this means is that workers may voluntarily choose to leave their jobs or work fewer hours. It does not mean that employers will fire anyone or cut staffing. And when a worker freely decides to resign, it is ridiculous to say that they “lost” their job. They didn’t lose it. They know where it is still. It’s just that they have chosen not to go there anymore (h/t Bobcat Goldthwait). That’s called freedom of choice.

There are many reasons why someone might leave a job under these circumstances. They may be seniors who wish to retire. They may be young mothers who want to be at home with their children. They may want to seek opportunities at other companies. They may be entrepreneurs who require more time to start a new business. Before ObamaCare these choices may not have been available because people were locked into their employer-provided health plan at a job that was not otherwise helping them achieve their personal goals. Now they will have more freedom to structure their lives in a manner that is more satisfying or appropriate to their circumstances.

Nevertheless, the Fox Nationalists falsely portrayed this exercise of free choice by workers as “lost jobs.” Then they judged this phony loss a devastating blow to ObamaCare. Their source for this blatantly misleading analysis is the “Moonie” Washington Times, a disreputable newspaper with an ultra-conservative bias. But it doesn’t stop there. The same fraudulent reading of the CBO study was aired on the Fox News Channel where they recruited criminal/congressman Darrell Issa to lambaste the “bombshell” report.

It’s no wonder that so many studies have proven that Fox News viewers are more ill-informed than viewers of other news outlets – and even those who view no news at all. The problem with the Fox News audience has never been that they lack information. The problem is that the information they have is more than likely untrue. We’ve been warned about this in the past by some notable thinkers:

“Beware of false knowledge. It is more dangerous than ignorance.” ~ George Bernard Shaw

“It ain’t what you don’t know that gets you into trouble. It’s what you know for sure that just ain’t so.” ~ Mark Twain

“The whole problem with the world is that fools and fanatics are always so certain of themselves, and wise people so full of doubts.” ~ Bertrand Russell 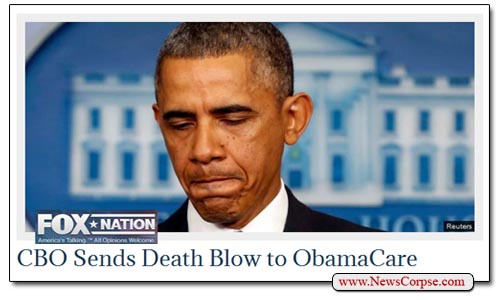 [Update] As Fox Nation escalates their mischaracterization of the CBO report with a feature story asserting a “Death Blow,” PolitiFact has analyzed the spin and the conservative claim that jobs will be lost due to ObamaCare. They found specific allegations, as articulated by House Speaker John Boehner and Fox News anchor Gretchen Carlson, to be “Mostly False.”

PolitiFact: “They made it sound as if jobs are going away because businesses don’t create them or because they eliminated existing jobs. The CBO report, though, was referring to workers who decide on their own to leave the workforce, because they don’t have to keep working a job just to keep their health benefits.”