In today’s New York Post, and on their website, is a cartoon that shows two cops shooting an ape and saying “They’ll have to find someone else to write the next stimulus bill.” I’m not going to help the Post out by linking to it. You can find it on your own if you’re interested. But here’s my response: 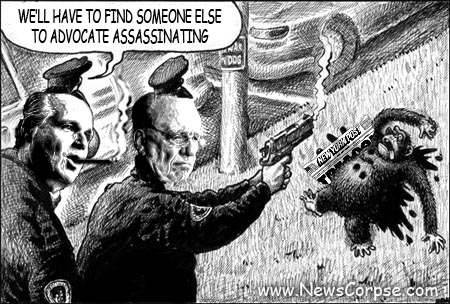 I suppose there will be apologists for the Post who will deny the obvious racist intent, but it’s hard to find another interpretation when the Stimulus Bill is so closely associated with President Obama and the cartoon depicts the author as a dead ape. In the best light, it is still an overtly hostile response to the serious issues facing our nation.

It is not however the first time a Rupert Murdoch property “joked” about assassinating Obama. Last year Fox News contributor Liz Trotta said:

“…and now we have what some are reading as a suggestion that somebody knock off Osama …uh… Obama … well, both if we could.”

Very funny, huh? And then there was the time Bill O’Reilly declared that he didn’t want to “lynch” Michelle Obama. That was considerate of him. 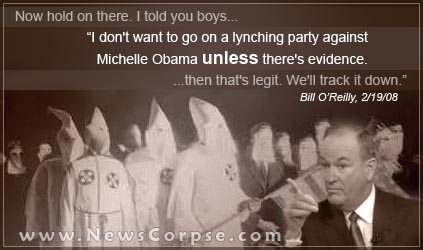 This recurring theme of racism and violence directed at the President and his family is just more proof that News Corp is not a legitimate news enterprise and should not be taken seriously or supported by consumers.