Rupert Murdoch’s New York Post has a long history of shameless bias and insensitivity. This is, after all, the paper that published a cartoon portraying President Obama as a monkey being shot to death. 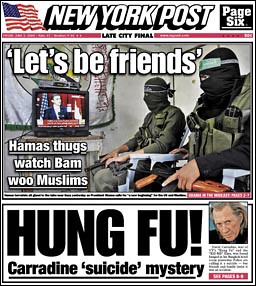 Now the post has moved their repulsive imagery onto the front page.

What first drew my attention to this was the utterly disgusting reference to the death of David Carradine. What Post editors must have thought was a cutesy play off of “Kung Fu,” the TV series in which Carradine starred, was entirely inappropriate and shockingly lacking in sympathy for the deceased’s family and friends.

But upon further examination, I noticed that the image at the top was no less repulsive. It depicts a couple of quasi-terrorists lounging on the sofa, caressing their assault weapons, waiting for a TV dinner, and watching Obama deliver an address to students at Cairo University in Egypt. They are wrapped up all snugly in their fatigues and wool caps and, if we could see their eyes better, I’m sure they would be glassy with admiration for what the Post describes as their “friend” who wants to “woo” them.

The obvious intention of the Post is to cast Obama as one of “them” – as a fellow Muslim speaking directly to his extremist comrades in the warmth of their secret lairs. Notice the rapt attention they give to their Manchurian leader. The juxtaposition of these hooded barbarians, serenely embracing Obama’s electronically glowing presence, with the superimposed text that speaks of friendship and wooing, can have only one purpose: To insinuate that the televised Obama in the background is just as much a threat to America as the fearsome subjects in the foreground.

This is propaganda in its most advanced and destructive form. It is a deliberate attempt by Murdoch and Co. to exploit his media megaphone and smear the image of the President. The Post, and everyone affiliated with it, should be embarrassed by this forsaking of journalistic principles. Of course, the Post, being what it is, probably feels only pride for its lack of ethics.

And what is it with the repeated use of the nickname “Bam” for the president? Is that supposed to create an association with an explosive device (by removing the beginning “O” and the concluding “a” from Obama’s name, the phonetic remainder would be pronounced “bomb”)? The Post has been using this label for some time. At least as far back as January 2008, in a hilariously stupid article suggesting that Obama could be the first woman president because he is slim, attractive, and well-dressed. By that measure, the Jonas brothers would be next Supremes.

It is time to let the Post know that their readers will not tolerate this sort of manipulation and dishonesty. This is a paper that loses about $50 million a year, but is kept afloat by Murdoch’s deep pockets and sustained evil. But that doesn’t mean that our complaints will go unheeded. After the controversy regarding the monkey cartoon, Murdoch personally apologized – sort of. So for anyone who is outraged at this demonstration of hate and slander…..

Letters to the Editor