The unfolding drama in the Nevada desert over a deadbeat cattle rancher’s refusal to pay customary grazing fees like every other rancher, continues to excite the Tea Party pseudo-patriots who believe that threatening a range war in defense of personal greed is a mark of virtue. However, Cliven Bundy’s domestic terrorism serves nothing more than his own selfish financial interests, and the crusade he purports to lead is rooted in the worst sort of perversion of constitutional principles.

Bundy has resisted paying to graze his cattle on federal land because he doesn’t recognize the authority of the government to assess those fees. In fact, he doesn’t even “recognize the United States government as even existing.” His argument has lost repeatedly in court, but he continues to ignore his responsibility and to defy the law. His malfeasance amounts to the theft of over a million dollars from the American people. Ironically, if his argument prevailed he would be subject to paying the state of Nevada for grazing rights at $15.50 per head of cattle, rather than the federal rate of $1.35. But simple math, like simple logic, is too complicated for these cretins. So instead, they take up arms against their fellow Americans and pretend to defend their twisted misinterpretation of the Constitution.

Now we have evidence of where Bundy may have picked up his constitutional delusions. In a recent media appearance, Bundy was proudly displaying a copy of the Constitution in his shirt pocket. 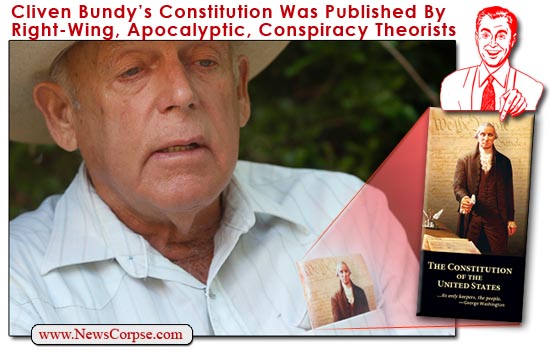 After searching for the distinctive cover of the document in Bundy’s pocket, the publisher turned out to be the innocuously named National Center for Constitutional Studies (NCCS). However, the NCCS is not the commendable educational organization it purports to be. It began life as the Freemen Institute, a vehicle for the far-right, Mormon, anti-commie, history revisionist, W. Cleon Skousen. Skousen taught that the Constitution was inspired by a God who intended America to be a Christian nation. He also professed the canon of white supremicism that Anglo-Saxons are descended from a lost tribe of Israel. The Southern Poverty Law Center chronicled the NCCS curriculum based on Skousen’s philosophy saying that he…

“…demonized the federal regulatory agencies, arguing for the abolition of everything from the Occupational Safety and Health Administration to the Environmental Protection Agency. He wanted to repeal the minimum wage, smash unions, nullify anti-discrimination laws, sell off public lands and national parks, end the direct election of senators, kill the income tax and the estate tax, knock down state-level walls separating church and state, and, of course, raze the Federal Reserve System.”

Sound familiar? Skousen’s warped ideology syncs up perfectly with the Tea Party and other purveyors of fringe fear mongering like politi-vangelist Glenn Beck, who literally begged his audience to read Skousen’s book, “The 5000 Year Leap,” which Beck said was “divinely inspired.” The conspiracy-obsessed NCCS shares with Beck and Bundy an animosity toward government that exceeds the boundaries of common sense. Along with Skousen’s books, the NCCS website features anti-UN screeds (“Confronting Agenda 21”), treatises on wingnut electoral reforms (“Repeal 17 Now!”), harbingers of one-world government (“The Rise of Global Governance”), and appeals for institutionalized theocracy (“America’s God & Country”). No wonder Bundy was sporting a version of the Constitution that was distributed by the NCCS, an organization that advances ultra-conservative conspiracy theories and promotes anti-government hostility.

The threatening hysteria and deception emanating from Bundy, and the armed militias that came to his defense, are emblematic of the apocalyptic doctrine of the NCCS. It is no accident that Bundy’s Constitution was provided by a group whose teachings have been denounced by historians and constitutional scholars. But it does explain the extremism and advocacy of violence that Bundy et al have espoused. All of this makes it all the more inappropriate and irresponsible for Bundy to be hailed as hero by conservative media outlets like the National Review and Fox News who, just last week, compared Bundy to Gandhi in a feat of epic cognitive collapse.

117 thoughts on “EXPOSED: The Source Of Cliven Bundy’s Crackpot Constitutionalism”