The First Amendment to the Constitution of the United States of America includes a stipulation that the government “shall make no law respecting an establishment of religion.” The legal interpretation of that clause, with more than 200 years of precedence, holds that proceedings of official bodies of government may not engage in sectarian religious activity as it puts the imprimatur of the state on the particular spiritual practice.

Nevertheless, the Supreme Court just ruled in favor of the town council of Greece, N.Y, to offer prayers in the opening of their council meetings. The Court explicitly stated that they regarded these prayers as permissible even though they were predominantly Christian. The justification for the ruling was based on the absurd notion that the prayers were merely ceremonial and not religious.

“As a practice that has long endured, legislative prayer has become part of our heritage and tradition, part of our expressive idiom, similar to the Pledge of Allegiance.”

And joining the celebration of what is ostensibly ceremonial is Fox News, who cheered the decision with a joyful declaration that it was “A Win For Religion.” 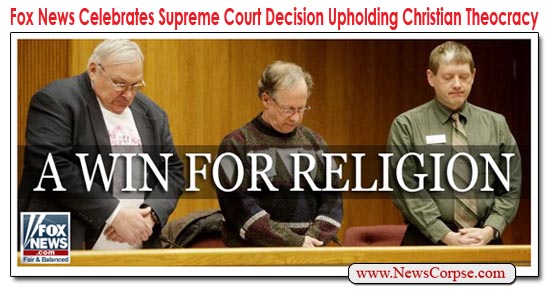 The language that Fox News used to report this decision demonstrates that it was indeed a matter of faith. After all, they didn’t declare it to be a “A Win For Ceremony.” The ceremonial argument is a thinly veiled excuse to permit proselytizing for Christianity. What’s more, the argument that reciting exclusively Christian prayers does not violate the establishment clause of the Constitution is a gross misunderstanding of the law. Such activity blatantly favors a specific belief and excludes all others with differing beliefs. To illustrate the point, just imagine the reaction if the town council decided to offer a Muslim prayer at the opening of the session. It would create a deafening outcry from Christians insisting they were offended by the invocation.

For evidence of that, take the example of a recent event in Colorado. The students at Rocky Mountain High School in Fort Collins were led by another student in the Pledge of Allegiance with the words “under God” replaced by the words “under Allah.” This was met with harsh criticism by Christianists in the community and the media, including Fox’s own resident religious bigot, Todd Starnes.

First of all it should be noted that Allah is the Arabic (not Islamic) word for God, and both Muslims and Arab Christians use it. Secondly, why would it be offensive for Muslim-Americans to pledge their allegiance to the American flag? Isn’t that something we should encourage, or are we only open to recognizing Muslims who hate us? More to the point, the criticism reveals the true intent of the religious extremists who aspire to force their religion onto everyone else through the use of official forums in government and schools. That is precisely the behavior that the conservatives on the Supreme Court sanctioned today.

For Fox News to report this decision with a headline that describes it as “A Win For Religion” is further evidence that they regard the issue as one of faith, despite their denials and those of the Court. Their own words betray their not-very-hidden motives.