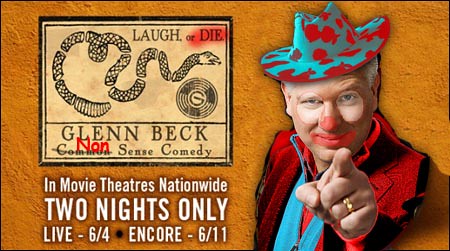 In the past Glenn Beck has revealed that he takes seriously his self-appraisal as a “rodeo clown.” He often describes himself as an entertainer. He tells his audience that “if you take what I say as gospel, you’re an idiot.” He has been exposed for shedding less than sincere tears on camera. He even admitted that there is a legitimate case for global warming despite his frequent mockery of it.

It’s hard to find anything that Beck actually stands for. His hypocrisy is legendary. And in today’s USA Today Beck adds to the list of his adventures in artifice. In the interview he was asked about the writing of his upcoming novel The Overton Window. This is what he said:

“There’s clearly no way that I’m sitting behind a typewriter or word program and pounding this out. … I have my vision and need someone to make sure that vision stays there.”

On the title page of the book, Beck cites three “contributors” with whom he shares credit. It’s rather surprising that anyone would consent to being saddled with credit for writing what appears to be an unintentionally hilariously piece of literary garbage. But it is not surprising that Beck couldn’t have written this book by himself.

Beck’s schedule already includes a daily three hour radio show, another hour on his TV program, numerous guest spots on other Fox News shows, and live personal appearances around the country. Where would he find time to write this, or any other book, and still be the devoted family man and father of four that he claims to be?

Beck’s admission that he doesn’t sit behind the typewriter makes no distinction between his new novel or his many other published works. This means that all of his frenzied fans who gobble up his nonsense in printed form are being ripped off because Beck is clearly not the author of the tomes he peddles with his name on it.

It’s unlikely, however, that his fans will hold it against him. They obviously are not the most discerning consumers to begin with. And as long as the final product affirms their previously held misperceptions of this fragile, tyranny-destined world, they’ll be happy – if you can call that kind of paranoid, doom-laden mindset happiness.