The right-wing media long ago cemented its status as a shrill, extremist platform for failed conservative positions, pundits, and politicians. Often it melded all three into its version of super-troopers, peddling partisan rhetoric and propaganda. Fox News, not surprisingly, is the best example of this with their employment of media-politico crossovers like Sarah Palin and Karl Rove.

However, to the extent that some of the more sober purveyors of news sought to maintain an image of seriousness and thoughtful analysis, even that boundary has been breached.

When Rupert Murdoch purchased the Wall Street Journal it was a respected news organization that, at least outwardly, aspired to adhere to established journalistic principles. Murdoch insisted that he was committed to preserving that heritage and that he would not impose his views on the paper’s editorial process. But this morning any aspiration toward ethical journalism was abandoned and replaced with an embrace of the most deranged lunacy straight off of the supermarket tabloid rack.

Dorothy Rabinowitz composed a screed for the Journal that is so devoid of rationality it makes an argument for her family to invoke conservatorship and have her confined to an institution for her own protection. It begins with the title The Alien In The White House. Despite a disclaimer at the end of the fourth paragraph that it has “nothing to do with delusions about his birthplace cherished by the demented fringe,” Rabinowitz has to know that the imagery in her words plants the very message she claims not to be espousing. The demented fringe will devour it with relish. She wants her readers to conjure up thoughts of a foreign, illegitimate, usurper to power. 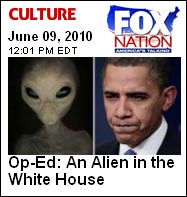 In support of this promotion of birtherism, Murdoch’s web site, Fox Nation, republished Rabinowitz’s column with a graphic exclamation point. The visual cues employed here escalate the routine insanity of those who believe that Obama was born in Kenya, to an even more absurd insinuation that he is not even from this planet. At this rate the Weekly World News may sue Murdoch for infringing on their fringiness.

But even the message to which Rabinowitz is laying claim distastefully casts President Obama as something other than a patriotic public servant. In fact, she paints him as borderline treasonous. In her view the President aligns himself with foreigners and pursues their interests and not those of Americans.

“A great part of America now understands that this president’s sense of identification lies elsewhere, and is in profound ways unlike theirs. He is hard put to sound convincingly like the leader of the nation, because he is, at heart and by instinct, the voice mainly of his ideological class.”

Never mind the fact that it was a majority of Americans, not foreigners, who elected him. Rabinowitz imagines that the country has a perception of the President as having a “distant relation to the country.” However, the truth is that she is the one who feels a distance from the mainstream citizens who rejected the policies of her ideological class; the policies that drove the nation into a financial ditch and embroiled it in two costly wars.

Ironically, the first example Rabinowitz offers of Obama’s other-worldliness is that, upon moving into the White House, he failed to find a place for a bust of Winston Churchill. She is literally arguing that by removing the bust of a foreigner Obama is aligning himself with foreigners. That is the level of cognitive disconnect the right suffers from in general. And, of course, had he placed Churchill’s bust on the mantle in the East Room, he would have been criticized for glorifying a foreigner and harassed about why an American didn’t get that spot of honor on the mantle.

It is to be expected that broadsheets like the Weekly World News publish stories about presidents meeting with Venutians, but it represents a devastating collapse of integrity to see the Wall Street Journal treading that territory. And the fact that this nonsense is plastered across multiple Murdoch properties proves that it is his initiative. He cannot pretend to be removed from the hysterical madness that has permeated his enterprise. He is responsible for Rabinowitz’s incoherent daftness, just as he is responsible for Glenn Beck’s fascist evangelism, and Bill O’Reilly’s arrogant racism, and the rest of the crackpot conspiratorialists at Fox.

If Rupert Murdoch ever hoped that by acquiring the Journal he would rehabilitate his reputation, he has fouled that up entirely. Rather than having the Journal’s respected history rub off on him and polish his legacy, he has rubbed off on the Journal and stained it forever. Nice work, Rupe.

ADDENDUM: With regard to the bust of Churchill, Rabinowitz was even more off base than I thought. First of all, Churchill’s bust was on loan from the British embassy and was returned before Obama was inaugurated, so he had nothing to do with it not being displayed. What’s more, Obama put a bust of Martin Luther King in the place where Churchill’s had been. And this is what Rabinowitz is asserting is somehow un-American?

6 thoughts on “WSJ: The Alien In The White House”