The American conservative, as represented by the Republican/Tea Party, is so consumed with hatred that they are now forming blockades to prevent busloads of children from being transported to safe and secure facilities while waiting to be processed by immigration authorities. 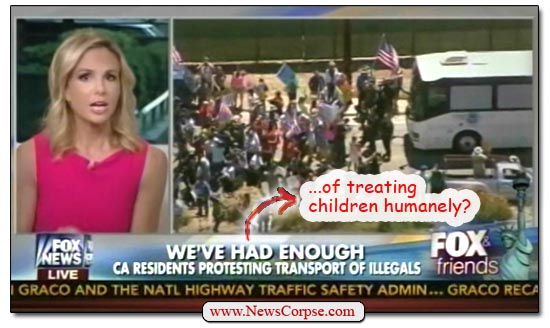 After weeks of media reports showing severely overpopulated facilities in Texas, where young children and even infants are housed in prison-like conditions, sleeping on concrete, lacking air-conditioning, federal officials are attempting to provide some relief by dispersing the thousands of child immigrants to various locations so that they can be processed faster and under more humane conditions. And this act of compassion and responsibility is being met with opposition by right-wing, bigoted protesters who favor mistreatment of kids simply because of their immigrant status.

The protesters literally blocked the roads preventing the buses from arriving at their destination in Murrieta, California. The kids had already been traveling for hours, and now were forced to remain in the buses for an additional two hour trek to a different facility. They chanted “USA,” “Impeach Obama,” and “Deport,” with a hostility that could only have exacerbated the kids anxiety and fear.

This unconscionable behavior was reported on Fox News in glowing terms, elevating the protesters to heroes and patriots who had simply “had enough.” It was reminiscent of the Fox News glorification of the criminally deadbeat rancher Cliven Bundy and his militia thugs. On Fox & Friends Steve Doocy introduced the segment saying…

“Now some people in one city in California have had it. There was a plane full of people flown from Texas to California and they were then put on a bus and they were taken up to Murrieta, California where they were gonna be processed. That was the plan. It did not go as planned.”

Notice that his intro left out entirely the age of the people on the buses. He and his co-hosts later acknowledged that these were children, but disparaged them as disease-ridden carriers of scabies, lice, Ebola, dengue virus, and Tuberculosis. To the extent that any of that were true it would be further justification for more humane treatment, not less. The Fox & Friends Krew seems to think that sick kids should be thrown back across the border to die.

Fox News continues to use repulsive language like their on-screen graphic that likened the kids in this relief effort to garbage by calling it a “Federal Dumping Grounds.” They also use the insulting term “illegals” even though almost every other media enterprise has banned its use. Note that wingnuts justify using the term because laws were broken. But drivers who speed are not called illegals. Patients who take medicine not prescribed to them are not called illegals. Bank presidents and oil companies executives who break financial and environmental laws are not called illegals. Apparently it’s term reserved to dehumanize immigrants alone.

It takes a special kind of bitter soullessness to protest children who are being brought to safety. These cretins apparently prefer that the kids remain corralled in hazardous conditions where they will suffer and be vulnerable to greater harm. And, ironically, the effort to transport the kids to other facilities is not only meant to ease their suffering, it is also necessary to expedite their processing. That would result in many of them being reunited with their families in their native countries, something the protesters ostensibly favor. But their actions, born of hate and ignorance, actually delay that. What a sad picture of American goodwill these vile protesters paint for the rest of the world to see and judge us by.