Not too long ago, the Affordable Care Act (aka ObamaCare) dominated the political landscape in both Congress and the media. It virtually sucked the oxygen out of every other issue that didn’t involve Benghazi. But lately there has been a conspicuous absence of news about the program. And Republicans, once devoted to its demise, have all but banished it from their public communications. Until today. 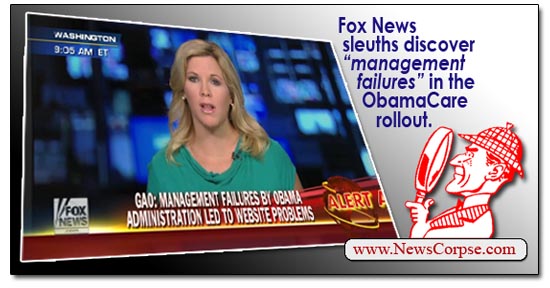 That’s right. Fox News has brought ObamaCare back into the spotlight to announce that a Government Accounting Office report has found that “management failures” led to the botched rollout of the website. The network banged their signature gong and ran their “Fox Alert” graphics to broadcast this breaking news. After all, who would have ever imagined that a lack of managerial oversight and efficiency were responsible for the debacle that accompanied the launch of the ObamaCare exchange?

Thank goodness Fox News is here to enlighten us with their probing journalism. Such tenacity is representative of their professionalism and surely has nothing to do with trying to shove an old and obvious story into the news cycle in order to damage the President’s standing.

Perhaps they are just nostalgic for the good old days when they had a juicy drama with which they could smear the administration. Back when Congress held over fifty votes to cripple or repeal the legislation. At the same time, multiple committees were investigating everything from the faulty website, to alleged security risks, to threats of criminal navigators, to allegations of false audits, and the ever-present fantasy of death panels.

The media, led by Fox News, obsessed over the same issues as they emerged from the GOP committees investigating them. But they added their own scare mongering in an effort to frighten citizens away from the program and hasten its failure. The press falsely reported conservative assessments that claimed millions would lose their insurance, that premiums would skyrocket, and that their personal health and financial records would be compromised.

However, much of that talk has abated in light of the fact that ObamaCare has become an unmitigated success. Over eight million people had enrolled by the end of the open enrollment period. And just about every metric for measuring success has surpassed expectations. Even Republican enrollees have reported being overwhelmingly satisfied. That may explain why Reince Priebus, the chairman of the Republican National Committee, has jammed into reverse. Just last February he told the National Review that…

Since then he has barely mentioned it. The last substantive comment he had about the program was in March. In May the RNC held their annual Spring Meeting where Priebus delivered a speech that only mentioned it once in passing while addressing a separate subject. His most recent allusion to ObamaCare was earlier this month when he tweeted “Thanks to #ObamaCare, average E.R. wait in California is 5 hours: […] And ‘it’s only going to get worse.'” Unfortunately for him, that comment was scored by PolitiFact and rated as “False.”

So it isn’t surprising that Fox News would jump at this opportunity to re-flog an old subject that had given them so much pleasure way back in, well, February of this year. They can’t hammer away at the actual programs or services that ObamaCare is providing, because most Americans are happy with it. So if the best they can do is to hype a glaringly obvious report that draws conclusions that everyone already knows, then maybe we should let them have their little bit of pathetic fun. After all, it’s either this or Benghazi.