Tomorrow the midterm election will finally be over (except for Georgia and Louisiana) and most of the so-called liberal media is predicting that it will be a Republican day with their party taking over control of the Senate.

That outcome is by no means certain. Democrats are said to command a superior ground game to get out the vote and all they need to do is hold the line in a couple of key battleground states to deny Republicans their victory. If Democrats manage to do that it will shock the blathering media drones and put a damper on the GOP’s funeral party.

But what if the Republicans pull it off? What if they get their Senate majority and Mitch McConnell becomes majority leader and every committee chair is handed off to a Republican who hates government? Based on the campaigning of the last few months, what mandate could the Republican Party claim for the two years until the next election (where they will probably be thrown out again)?

Well, if you take the words of the Republicans themselves, the only issue that they put forward for 2014 is that President Obama sucks. They abandoned every salient issue from immigration to taxes to abortion to deficits to terrorism, etc. The only matter that Republican candidates raised with any regularity was that their Democratic opponent was in the same party as the President and supported his policies. They rarely mentioned what those policies were, just implied that they were bad. The typical arguments for Republicans were merely arguments against Obama. For instance…

Sen. Rand Paul: This election will be a referendum on the president.

Sen. John Cornyn: It’s not as though people have all of a sudden fallen in love with Republicans. It’s just a loss of confidence in the administration.

Indeed, people have not fallen in love with Republicans. In fact, Obama’s approval rating in the low forties is four times what congress can muster. And he remains more popular than the GOP, the Tea Party, and the media that is belittling him. But since Republicans have no issues they can affirmatively advance, they have adopted a national platform of bitching about Obama. 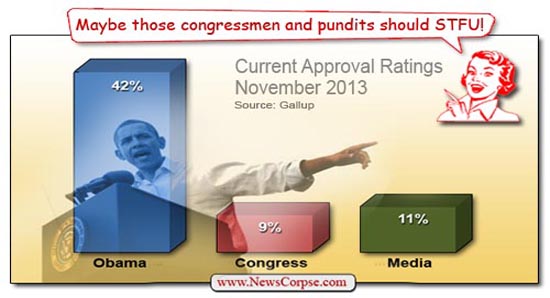 Republicans once promised to make ObamaCare the keystone of their campaign, but that fell off their list after millions of Americans signed up and the nation didn’t collapse into a communist dictatorship. RNC chair Reince Priebus was so hopped up on an anti-ObamaCare high that he said…

He has barely mentioned it since. In the final weeks of the campaign the media has been helping the GOP to distract the public from substantive issues by stirring up panic over phony crises like ISIL and Ebola. However, neither of those qualify as planks in a political platform. And even if they did, the GOP hasn’t taken a consistent position on them other than demanding that America oppose the Ebola-infected terrorist children who are streaming across the border with cocaine and condoms.

Consequently, should the GOP win a majority in the Senate they won’t have a mandate for any legislative agenda at all. They failed to convince voters that any of their policies were superior because they hardly mentioned any of their policies. The only thing they ran on was Obama-hate, and the only reason for a victory, if there is one, is that Democrats tend to sit out midterm elections.

When your own candidates are admitting that the election is a referendum on a President who is leaving office in two years, you have no authority to set an agenda. And since that has been the operating philosophy of the GOP for the past six years, don’t expect anything to change should a Republican Senate come out of the election tomorrow.

Republicans despise government and insist that it doesn’t work. Then, when they come to power, they do everything they can to prove it. That’s why the last GOP administration left the country crippled and despairing. If you don’t want to see that again, be sure to get off your asses and vote tomorrow. Whatever problems you may have with Obama or Democrats, they are minor when compared to the damage the GOP could do with their nutcases chairing committees like Jim Inhofe who believes that Climate Change is a hoax and is in line to head the Committee on the Environment.