Fox News kicked off its annual War on Christmas early this year with an October 16th report that slobbered buckets of panic sauce over the Obamanazis attempts to prevent unnecessary deaths from faulty Freedom Ornaments on Jesus Trees. And now the cold weather war escalates as Robot Chicken joins the fray. 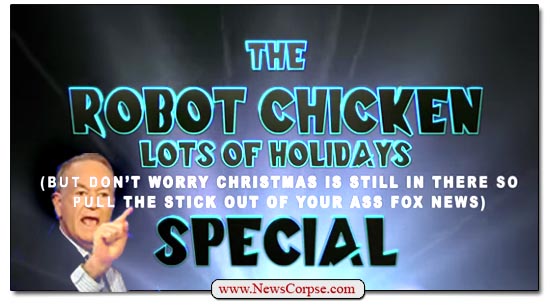 Before I go any further… Yes, this is a real program. The Adult Swim animated fowl’s entry into the battle was announced in a press release that reads…

“The Nerd unleashes holiday havoc in this sneak peek of the Robot Chicken Lots of Holidays But Don’t Worry Christmas is Still in There Too So Pull the Stick Out of Your Ass Fox News Special.”

This offensive is certain to produce a stern response from Fox’s X-MAS Wolverines who will assuredly retaliate in farce. Expect Fool King Eric Bolling to name Robot Chicken his “Fool of the Week.” And don’t be surprised if Bill O’Reilly declares the Nerd a pinhead and lackey to the tyrannical Obama goose-steppers. Glenn Beck, of course, will uncover the clandestine relationship between the Cartoon Network and George Soros, who he’ll accuse of collaborating to install a Cartoon Caliphate in the Middle East Earth.

This escalation of hostilities is a harbinger of the apocalyptic doom that is rapidly approaching. There is no way out. So either pledge allegiance to the Fox Brigades defending traditional values or submit to Santa’s will in Hell. And have yourselves a merry Chicken Little War on Christmas.