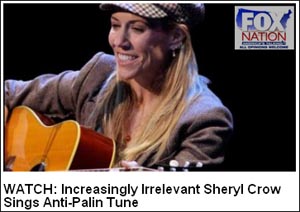 Today on Fox Nation the editors featured a story that further demonstrates how out of touch they are and how desperately dishonest. The Fox Nationalists decided to go after the beautiful and talented Sheryl Crow for her audacity to exercise her First Amendment rights. The headline in their entertainment section was “Increasingly Irrelevant Sheryl Crow Sings Anti-Palin Tune.”

For the record, Crow is a nine-time Grammy winner. Her last album, “Detours,” debuted on the billboard charts at number two and received another Grammy nomination just last year. Her just-released “100 Miles From Memphis” is presently #10 on Amazon’s overall music listings and #1 on Amazon’s Adult Contemporary list.

For a news enterprise that repeatedly features Ted Nugent, Jon Voight, and Victoria Jackson, they have a pretty funny definition of “irrelevant.” Especially since Crow’s new album is getting a lot of buzz and she is making high-profile appearances around the country and on national television programs like Letterman and Leno. Her anti-Palin song only reinforces her relevance. Plus, it’s a great song:

I think what the Fox Nationalists may really be upset about is that Crow speaks her mind, and does so effectively. A previous article on Fox Nation referenced an interview of Crow by Katie Couric in Glamour Magazine. In that interview Couric asked Crow what she thought of the Tea Party.

“My main concern is that it’s really fear-based. What’s coming out of the Tea Party most often, especially if you go onto YouTube, and you see some of the interviews with these people who really don’t even know what the issues are, they’re just swept up in the fear of it and the anger of it. They’re not sure what they’re angry at; They don’t understand what’s happening on Wall Street. They haven’t educated themselves, but they’re just pissed off. And I understand that, I’m pissed off too. But knowledge is power, and anything less than that when it comes to anger is dangerous.”

Those remarks led the right-wing media machine to condemn Crow for calling Tea Partiers angry, uneducated, and dangerous. I don’t know what they’re complaining about, it seems fairly accurate to me. Now her new song is getting blasted by the same wingnut crowd, and even though they call it an anti-Palin song, it is much broader than that. In fact there is only one reference to Palin via her notorious Tweet asking her disciples to “reload.” There’s your angry, uneducated, and dangerous, right there.

The central theme of the song addresses the noisy bickering of cable news shoutcasters. It is more a critique of the media than a hit on Palin. In one line she laments that, “Ignorance is patriotic. Reasons are so idiotic.” That pretty much describes the state of debate amongst the right-wingers who inhabit Fox News. They glorify ignorance and revile reason. All the better to exploit emotion and propaganda. And if that’s not relevant, I don’t know what is.

9 thoughts on “The Ever Irrelevant Fox Nation Slams Sheryl Crow”